In Oct 2014, the white supremacist National Policy Institute attempted to hold a conference in Budapest, Hungary in the latest effort by paleoconservatives in America to unite with fascists in other parts of the world that have seen a little more success than they ever could stateside. Unfortunately for them, it didn’t come without the usual opposition, and that meant the conference location getting raided by Hungarian police and the conference itself shut down – or at least sent away to an undisclosed location. NPI leader Dick Spencer ended up getting detained for that weekend by authorities, eventually deported and banned from entering much of Europe for the next three years. Meanwhile the Hungarian white nationalist Jobbik party and British white nationalist publisher Arktos pulled back their support before the conference, and other like-minded foreigners were either being told to stay home or were sent back to their countries if they showed up at the airport. One of those people that was denied a visa by the Hungarian government was a Russian nationalist so-called “philosopher” named Aleksandr Dugin, and his “philosophy” has made room for such gems from him such as “If we want to liberate ourselves from the West, it is needed to liberate ourselves from textbooks on physics and chemistry,” and that the entire Internet needs to be banned “because it gives nobody anything good.”

This is the kind of thing you should expect from a guy who is cheerleading a “conservative revolution” in Russia that wipe out all vestiges of liberalism in that nation and return Russia to the totalitarianism the world complained about with the Soviet Union. Dugin apparently thinks however that the only problem with that was that the USSR chose the platform of Communism to work from, as opposed to Fascism, more to the point his preferred brand of Fascism called Eurasianism. And make no bones about it, that’s exactly what he is about. While saying he is against “biological racism”, he has written in the past that in his preferred make up of Eurasia that “wherever there is a single drop of Aryan (Slavic, Turkic, Caucasian, European) blood, there is a chance for racial awakening, for the rebirth of the primordial Aryan conscience.”

As Russia and the Ukraine go to war over Ukraine’s effort to become an independent nation, Dugin is right there trying to keep the Ukraine part of Russia, corresponding with the loyalists in Ukraine, building alliances in the European Union between right and left parties to influence EU policy in the region and being the author behind the annexation of the internationally recognized Ukraninan territory of Crimea by the Russian Federation. A professor in the Department of Sociology of International Relations of Moscow State University until 2014, he lost his job when the Russian government started to soften their position on the Ukraine conflict.

Born in Moscow, Dugin was an anti-communist writer in the Soviet Union in the 1980s. He once embarked on a military career and enrolled in the Moscow Aviation Institute, but after authorities learned of his association with far right circles – even translating into Russian Pagan Imperialism by the neo-fascist (although he might say otherwise) philosopher Julius Evola – They arrested and eventually canned him. He worked as a street sweeper and journalist until things started to fall apart with the Soviet Union, and then he jumped into politics. He joined the anti-Semitic group Pamyat, who believed, among other things, that the so-called “Zionist Occupational Government” (ZOG) was running Russia into the ground. He left Pamyat because of he considered its low intellectual level, and eventually started a book publishing company and also went on to help found the National Bolshevik Party (NBP) in 1993. Considering them not to be as right-wing as he liked, Dugin led some other hardliners to split off and form the National Bolshevik Front (NBF). He later split from this and started to associate with other circles, including Vladamir Putin’s, and he has been encouraging him to find alternatives to a relationship with America. He particularly pushes a Eurasian alternative that would solidify the bonds of European and Asian nations and become a rival to the United States whom he believes is pushing a worldwide hegemony through its involvement in world affairs, particularly the Middle East.

In 2002, the Eurasian Party was formed by Dugin and officially recognized by Russia. Three years later, he started the Eurasian Youth Union (EYU) in the Ukraine, and it only took a year before the Ukraine listed him persona non grata and banned the EYU. This has not stopped him for basically using his supporters there to wage a war on the Ukraine for years before Russia decided to. And with the outbreak of violence in the region Dugin has been feeling his oats. In a tweet on August 23, 2014, he said:

Now just because Dugin isn’t a fan of the West doesn’t mean he stays completely away. In March 2015 it was announced that he was to speak at Texas A&M. The invite came courtesy of Preston Wigginton, a neo-Nazi from Texas who has been trying to forge international links between like-minded folks here and abroad to keep “white nations” from becoming “a homogenous muddle of sludge.” He has lived in Moscow, subletting from his friend David Duke and working with Russian fascists, and being that Texas A&M is a public university has been renting out auditoriums there and putting on speaking events for white supremacists for over a decade. 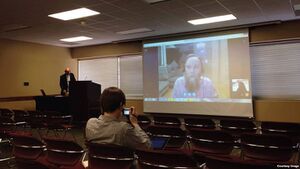 When Wigginton tried this for Dugin however, there was a bit of a roadblock. Dugin and other leaders of the EYU are sanctioned by the United States “for being responsible for or complicit in actions or policies that threaten the peace, security, stability, or sovereignty or territorial integrity of Ukraine,” according to the US Treasury. That meant he could not enter the country – but its totally not for a book he published in 2014 titled The American Empire Should Be Destroyed! So Wiginton set up a Skype presentation for him, a lecture titled “”American Liberalism Must be Destroyed “! Despite protests from various groups, notably the Ukrainian Congress Committee of America, the event went on as planned on April 29, 2015 and it had to be prefaced with Wigginton saying the U.S. government said Dugin was not allowed to “say anything promoting violence or taking over the U.S. government or anything about genocide.” Dugin went on to express his love for the American people, and said his sanction must have been sparked by those “who fear the evolution of Putin’s Russia in the direction that I am representing.” From pictures of the event, it didn’t look like the love was returned, as rows of empty seats would indicate.

Dugin has been able to elevate his status with the current war in Ukraine, being a spiritual advisor to Putin in all this. His daughter Darya Dugina had been at his side the entire time, acting as her father's press secretary at times and spreading misinformation about the war, in particular claiming that the massacres of Ukrainian civilians by the Russian army during the invasion were staged and even visiting the Russian occupied cities of Donetsk and Mariupol. In July of 2022, she and her father were sanctioned by the UK for being “a frequent and high-profile contributor of disinformation in relation to Ukraine and the Russian invasion of Ukraine on various online platforms." They won't have to worry about her anymore however. A month later, she and her father were leaving an arts festival just outside Moscow, taking separate cars. She however was in her father's car and someone fixed a bomb to it. The car exploded, killing the 29-year-old. At the time of this update (8/21/2022), there are no suspects, although many have speculated the bomb was meant for Dugin or both of them.

In December 2014, leftists and rightists, many from the U.S., traveled to Moscow to participate in an international conference on the “Right of Peoples to Self-Determination and Building a Multi-Polar World.” Being that there were so many hardcore fascists there, any leftist that attended should wonder just how much of an alliance they can truly build. But given that one of Dugin’s books is titled The Theory of a Multi-Polar World and how EYU members were in attendance at the conference, those same leftist attendees should have really wondered just what in all holy hell were they doing there. There is no building any kind of alliances with Fascists, period. Dugin, who ultimately is nothing more than a snake-oil salesman trying to make Fascism look appealing to everyone – just before he starts cutting the throats of many he dupes – is a very good example as to why there isn’t.