National Vanguard was only able to squeeze out 20 people to their National Conference in Elmwood Park, on May 13, 2006, and considering who came out to it that says a lot about the decline of the neo-Nazis over the past few years. There were those that are known only to folks who follow this kind of thing, and then there were two names that everyone knows. One was David Duke. The other was Prussian Blue, the two Nazi twins that have been all over the place since they appeared on ABC's 20/20 program. While the twins stood in the parking lot with big sunglasses on watching the counter protesters, their mother April Gaede decided to engage some (including DLJ) in conversation.

April has been in our backlog for some time because we were trying to find a way to write her bio without attacking her kids. It should be noted that it is a tactic among WPs to scream indignation at anyone who would go after to preteen girls, which is in truth a rather cheap and cowardly way to deflect their critics. It hasn't worked yet, and while we are still cautious about how we approach this, we decided not to worry about it all that much. It is April's ass that needs to be put on the grill anyway.

April is of German and Irish extraction. We note this for a reason. She told us that her father Bill Gaede was the first one in their family to marry outside the German lineage. He still married white so it's all good, but it still caused some issues in her family for a time, and she still think it would have been better if he stayed within the culture. Raising his family in Fresno, CA, Bill is a rancher who a few articles as well as that ABC story noted him branding horses with swastikas.

April went on to college, dropped out, then at age 20 married Kris Richard Lingelser, a man she once described as a pot-smoking Icelandic pole-vaulter. From this union Lynx and Lamb were spawned in 1992. April was a little wild back in those days though. Two years later she decided to try and win a radio contest by riding a horse through the streets wearing nothing but a cowboy hat, boots, G-string, bunny tail, and a pair of bumper stickers slapped across her breasts. That landed her in jail for indecent exposure. Things might have been wilder still on the homefront, because the marriage didn't last too long. Claiming that their relationship turned violent, she filed a restraining order against Kris in November 1996, and they divorced three months later.

April rebounded with another marriage, which went south in 2001, and is now married to husband #3, Bakersfield, CA schoolteacher Mark Harrington (sometimes he uses the fake last lame "Neufeldt"). Yes you read that correctly. Not only are their children being brainwashed by their crap, apparently they have access to yours if you live in Bakersfield! 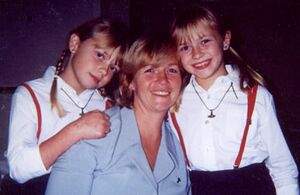 In 2001, April joined the National Alliance, and she brought her home-schooled little moppets Lamb and Lynx with her. Within the year, the girls made their national television debut on a VH1 special on hate music, which was more like a Resistance Records infomercial to anyone that saw it. Soon they were on the cover of that label's magazine and going all over the place with April playing the role of stage mom. Their shtick is to play folksy versions of Skrewdriver songs, although April says their new album will mostly songs they wrote.

All three even managed to score a movie credit courtesy of some low budget horror film called Darkwalker. You gotta love April Gaede for allowing her nazi children to be put in a movie as "creepy twins", and if that isn't typecasting we don't know what is. April is also in the movie as "Mrs. Hobb". Oh, all of this shows up on the Internet Movie Database, and there are comments clamming April Gaede and her daughters, not to mention the neo-Nazi response justifying their beliefs, as well as the obligatory free speech cop-out.

The thing that sucks about it is goes back to something April and others repeatedly like to say, that Lynx and Lamb are the most respectful and likable kids one would ever meet. That very well might be true, since every interview we see them in shows this. However, it's not the twins we have so much an issue with as we do the institution that they are a part of, and it is that we will react to, not them. Something tells us we owe it to them. In the end, we do not believe Lynx and Lamb are what April and all the other WPs around them want them to be.

All the hell around Prussian Blue began around the time they were supposed to play a county fair, and when people found out what kind of musical group they were, they were disinvited. That got them a segment on ABC Primetime, and everything really exploded. Soon they were being interviewed by all sorts of magazines, and being talked about everywhere. Some media outlets, in their never-ending quest for the sensational story, have even allowed themselves, much like VH1 did with their hate rock special, to become advertisements for Prussian Blue, agreeing to conditions for interviews like how the story could not have references to hate or Nazis. That is what Teen People did, and when those conditions were made public, folks cried foul, and the story was killed.

No one has a kind word to say about them, and many especially take it out on their mother April, many saying she is brainwashing her kids and should have them taken away. They tried. In 2006, the twins' father Kris Lingelser tried to gain custody saying he was not too keen about their mother's parenting habits, particularly if they involve using them as tools for violent hate groups. In addition, April reportedly was planning to bolt out to Montana, and he was especially not too happy about that.

National Vanguard and Stormfront went to work on their smear campaign, painting Lingelser as a crack head, and did everything they can to keep their gravy train from leaving the station. That was a bit harder to do because in February of that year both EBay and Paypal cut off their ability to sell cds via the internet on their website. That and the straight up backlash against this group had been hurting April Gaede's efforts big time. Meanwhile Mark Harrington had sold their house and they are staying up around Fresno, California by April's parents until they figured out if they can move up to Montana. Besides the fact that Mark still worked in Bakersfield, California, the twins still have an dentist in town, so they will trek down whenever they have an appointment, but are mostly staying up North.

In the end, Lingelser lost his bid. He lost custody of the girls when they divorced and had limited contact with them, particularly after information came out about him threatening April and the girls. All of that figured into the verdict. After the trial, April split with the girls to Kalispell, Montana, and the community immediately made her feel right at home - with flyers warning her neighbors about what just moved in. April's response was to file a complaint with the police, forgetting that the free speech that she uses to spread her filth also protects those that try to clean that filth!

Meanwhile April is still trying to spawn more kids. She has one other besides the twins, a two-year-old daughter named - expect this kid to have a shitty upbringing - Dresden. There is something interesting about her desire for more kids, however. April is a carrier of cystic fibrosis. She does not have the disease herself (well, she says she doesn't), but she can pass it off to her offspring.

Being a eugenics fanatic, this will pose a problem should she have a child that ends up with the disease. You see, that's a genetic defect, and a no-no in Nazi Land. To date, this hasn't happened - or rather she is not saying it has happened - and we really hope it never does, because if you think Lynx and Lamb have it rough, what do you think is going to happen to a child of April Gaede's with Down's Syndrome or Cystic Fibrosis?

We need to end on a important note. Lynx and Lamb are not the problem.

When we go onto various sites to do research and we see comments on blogs about Prussian Blue talking about bashing their heads in, that they are whores, bimbos, sluts, etc. That's a problem, and folks need to lay off that shit. When that happened on our discussion board, we deleted the thread. It is a shameful thing what is happening to Lynx and Lamb, but in the end they did not create the world they are being brought up in. Their mother did, and it is the only one they know. Malice directed towards a couple of 13-year-olds trying to make sense of all the bullshit isn't going to stop it. When they are 18 and have the ability to be independent, and they still choose this path, that's when they have to be dealt with, and even then we will call out mommy for what she did to them. To that end, let's make this clear: April Gaede has proven herself to be a worthless individual in every respect of the word. DLJ and April had a rather decent conversation in Elmwood Park, NJ on May 13, but does not mean we will forget that she is a piece of shit - that needs to be flushed.

Editor's Note: Lynx and Lamb were about 14 when they decided to cease touring. In a 2011 interview with The Daily, they renounced their previous politics.