In January of 2003, after an aborted anti-Martin Luther King, Jr. Day rally he sponsored, National Alliance Unit Coordinator Chester Doles announced that he was laying low for a bit, feeling that White Power organizations such as his were too heavily infiltrated to make any real gains.

Not long after this email, the Feds, who were indeed investigating him since July 2001, snatched Doles up. He remained in jail on multiple weapons charges, in a case that has made him the cause célèbre for neo-Nazis. His wife Theresa traveled the country raising money for his case, and former congressman Bob Barr – himself a veteran of neo-fascist politics who even spoke at a Council of Conservative Citizens conference – signed on as one of his lawyers. Barr has made associations like this before, once being the keynote speaker for a conference sponsored by the Council of Conservative Citizens. We were going to write that he should pay more attention to those he chooses to defend, but we think he knows exactly what he is doing. Let us take this time to school those that are not in the know about his client. 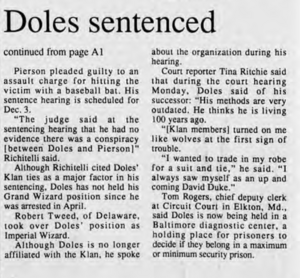 Doles has had a rather active history with white supremacist groups. He comes from five generations of Klansmen and he himself was a Grand Klaliff (vice-president) of a Maryland Klan outfit. According to the Southern Poverty Law Center, Doles had racked up nearly a dozen assault arrests before he moved to Georgia, serving two separate prison sentences in Maryland. The second and longest one was for the vicious 1993 beating of a black man who he and a fellow Klansman, who was also arrested, left for dead after they saw the man riding in a truck with a white woman.

Doles netted seven years in prison for that, serving only four, and after his sentencing, he quit the Klan and vowed to clean up his image. According to his website, he “made a vow to himself that he’d graduate (high school) before his oldest child” (you read that correctly), and around 1999 received his diploma at the age of 39. This was also around when he started following William Pierce and the National Alliance. He was often seen at rallies such as the July 29, 2001 rally in Washington DC where then-NA Deputy Membership Coordinator Billy Roper took a tire iron to the head.

An anti-immigration activist in particular, he also organized xenophobic rallies in 2001 and on July 13, 2002 both in Gainesville, GA, a town with one of the highest populations of migrant workers in the state. Of course, hatred of immigrants will always take a backseat to his hatred of Jews, and since the NA perceived Arabs and Muslims as hating Jews as much as they do, they attempted to ally themselves with Arabs. When we caught up with him, he was planning to participate in pro-Palestinian rallies in Atlanta – whether they want him or not. By this time, Chester was the leader of the Lumpkin County, Georgia chapter of the National Alliance. He worked closely with Roper, who was ejected from the group in 2002, and North Carolina Regional Coordinator, Will Williams. Make no mistake about it, however. He has no love lost for Arab people.

On March 7, 2003, Chester was snatched up by the feds who raided his home finding 13 firearms. The firearms are registered under the name of his wife Teresa Ann, which would make them legal to posses. The warrant that prompted the raid however, was based on an informant who befriended Doles. He told authorities he saw Doles wearing a pistol on some occasions, and just a month before the raid Doles told him he had a rifle in his closet and had buried nine other guns in the ground “but could get to them quickly if he needed them,” according to the warrant. If this is true, Doles is toast and that would explain the massive fundraising effort that immediately went underway.

According to reports the legal defense fund has gone past the $75,000 mark, and that was enough to retain former US Representative Bob Barr as his attorney. This has been particularly curious as, like we said before, Barr has a bad habit of rubbing elbows with these folks. In 1999 he along with Sen. Trent Lott were called out for their keynote addresses at a conference of the Council of Conservative Citizens. Barr’s speech was in defense of the same anti-immigration stances that Doles defends, so were not really surprised that these two hooked up. By the way, Chester was denied bond because the judge looked at his past behavior and noted a network that could aid his escape should he be freed, including law enforcement. If the guy is able to raise enough money to retain the high-priced Rep. Barr, you know this is a valid concern.

Barr’s representation was not enough for him to be cleared, however. He plead guilty to the charges and was sentenced to six years, getting out in 2008.

Before his incarceration, Doles was in the process of finishing college, and had said he hoped to run for office someday, but now all of that is either on hold or a virtual impossibility. Meanwhile Theresa and their 11 kids continue to promote him as some sort of martyr and hero (although their “Free Chester Doles” webpage is now down). If he was anything more than a scumbag Nazi however, he would have discarded this crap and looked for a real job to support a family that is now in danger of following him down the same wrong roads he traveled.