Chris Hood (Christopher R. Hood, Jr.) is the founder and leader of neo-Nazi group NSC-131 New England. He grew up in Dorchester and Malden, MA and lives in Pepperell, MA (as of March, 2022). He attended a special high school where he got involved in right-wing activism. Sometime between 2017 and 2019 he joined Patriot Front and became quartermaster for their their New England chapter, Network 7. In 2019 he was arrested with two other men while distributing Patriot Front propaganda in E. Boston. Also in 2019 he and other members of Patriot Front joined a neo-Nazi organization called The Base. That organization fell apart after some national leaders were arrested, and they founded NSC-131 New England in early 2020. Hood was reportedly kicked out of Patriot Front for stealing the group's money to buy drugs. In spring of 2021 Hood was interviewed in a livestream by neo-Nazi media personality "Hammer" (Chris Pohlhaus). Both noted that northern New England is the "whitest" part of the US, making it an ideal hub for white supremacists, and expressed their desire to bring back the KKK in New England. Hood encouraged far-right college students to start their own groups and to build a reputation by "bullying" white women who "race mix." (Hood is himself mixed-race-- his paternal grandmother was Asian American.) In March of 2022, when NSC-131 demonstrated at the St. Patrick's Day parade in South Boston, Hood was arrested for public drunkenness and released the same day. He was also arrested in July, 2022, when NSC-131 demonstrated at a drag queen story hour in the Jamaica Plain neighborhood of Boston. 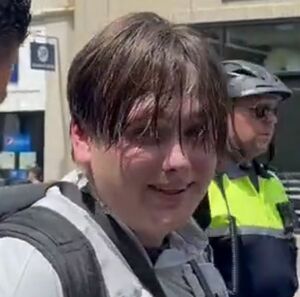 Chris Hood being arrested in Boston in July, 2022, from a video shot by Rod Webber. 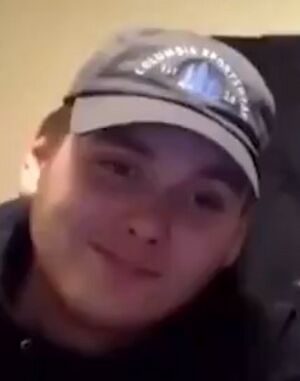 Chris Hood from a livestream with Hammer in Spring, 2021.
Retrieved from "https://rogues.wiki/index.php?title=Chris_Hood&oldid=2432"