Once upon a time the media tried to pass him off as a "reformed" racist. This jerk even had some black people on his side (see James Meredith). The majority of the people who listened to him felt otherwise and in between the time he dropped out of his initial national spotlight and now, Duke went back to his racist ideologies. Still, it is with the knowledge of these restored beliefs that in September, 1997, he was elected leader of the Republican Party in Louisiana's largest parish.

Now the Republicans hate it whenever some is this open about their racism in their ranks. Let's face it, this doesn't win votes. GOP members should always keep their bigotry well concealed, as far as these things go. To that end, one Louisiana GOPer declared Duke's group as "renegade". Not so.

Louisiana Governor Mike Foster has won election and reelection with the support of David Duke, even using Duke's mailing list in his campaigns to defeat the two black canidiates he had to face. His sidekick Bruce Alan Breeding (a/k/a Vince Edwards) finds it funny.

When we ran into Duke on April 1, 2000 at the American Renaissance Conference, we just had to do something silly like get his autograph! 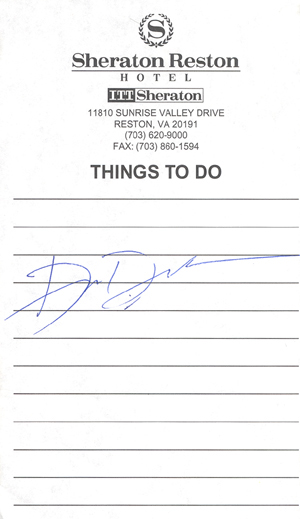 But let us take a look at the history of Mr. Duke, shall we? He started out as a small-time leader of a white power organization at Louisiana State University where he was a student in the early seventies. He became the National Director of the Knights of the Ku Klux Klan in 1974, urging Klan members to "get out of the cow pasture and into hotel meeting rooms."

For the past 25 years, he has increasingly attempted to follow his own advice, by using code words, and increasingly disguising his ideas behind more mainstream conservative-sounding rhetoric. In fact, his title as "National Director" was renamed from "Grand Wizard in an attempt to demystify the Klan. Eventually he felt that the spectre of the Klan had too much of a bad stigma attached to it, so in 1980 he resigned his position and started the National Association for the Advancement of White People (NAAWP).

In 1989, he was elected to the Louisiana State Legislature, and it was this that made him the most recognizable white supremacist today. After his election he passed on his leadership of the NAAWP, and since that time the group has undergone a series of leadership changes and internal struggles. According to his website, he is "not associated or involved in any way with any current NAAWP groups", but his current organization the European-American Rights Organization (EURO) has members that are part and even head the local chapters of both groups.

As people started to hear of Duke more, he pretty much stiffed everywhere he went. He has lost bids for Governor and the U.S. Senate in Louisiana, and for President of the United States in 1988 and 1992. Most recently, in May, 1999, he lost the race for US Congress. He has, however been able to secure the position of as Republican Party Chairman for the St. Tamany Parish in Louisiana. In November 1998, he self-published My Awakening, a 700-page autobiographical magnum opus of Duke's racism, anti-Semitism, and bigotry. White supremacist groups in America swear by the thing, hawking it on their own sites.

In January 2000, Duke started EURO, whose purpose is to "defend the civil rights of European Americans." Upon it's inception this group was called N.O.F.E.A.R. (The National Organization For European American Rights), but in June of 2001, when No Fear Clothing, Inc. filed a copyright infringment lawsuit, Duke made a name change. Since the formation of his new organization, Duke has made no secret of his allegiances to other racist and anti-Semitic organizations.

He has reportedly appeared at a variety of extremist events, including a meeting of The American Friends of the British National Party in March, and an American Renaissance conference in April, 2000, where One People's Project bumped into him. In addition, in keeping with the stated goals and political ideology of N.O.F.E.A.R., he has appeared at various pro-Confederate flag, anti-immigrant, and anti-affirmative action rallies. He also has completed another book, which is titled Jewish Supremacism, and is currently working on another book "about the spiritual aspect of the struggle to preserve and protect our heritage."

All, however is not well in David Duke's world. Late in 2000, Duke launched on a campaign to build a racist stronghold in the former Soviet Union, going to Moscow at the invitation of right-wing Russian nationalist Vladimir Zhirinovskiy. While there, the feds raided his home in Louisiana and walked out with 22 boxes of bank statements, credit card receipts, tax records and mailings for EURO. Agents also removed three computer hard drives and a rifle that one of them said had been reported stolen. All of this stemmed from the scrutiny that the feds put on Duke's finances since Louisiana Gov. Mike Foster paid $152,000 for a mailing list of Duke's supporters.

When Duke was summoned before the grand jury in May 1999, his attorney, James McPherson, said he assumed that his client was the target of a criminal investigation. Although Foster was fined, $20,000 by the state ethics board for not reporting the purchase, Duke never being charged in the case, Duke admitted he did not pay taxes on $128,000 from the sales, but said he did file amended tax returns and is paid up. The feds are now concerned with other financial matters, including his fund-raising.

According to 'The Rise of David Duke', a book by former Times-Picayune reporter Tyler Bridges, Duke once sent out a personal-fund-raising letter over the signature of supporter Mark Watts, called the founder of Dick Barrett's Nationalist Movement. This was done without Watts' knowledge or consent, but Watts declined to press charges. According to affidavits taken by the IRS from some angry contributors, those who sent in money was under the impression that it was going to Watts in defense of comrades arrested during a demonstration. Duke never returned the money, and news accounts began to appear claiming that Duke had been seen gambling in various casinos around the country. When the feds raided his home, there were two cars in the driveway, one a black Mercedes E320 with a dealer's license plate and the other a red Oldsmobile with several bumper stickers, including one with a Confederate flag and the slogan "Never apologize for being white." 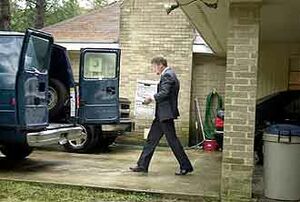 Blaming all of his troubles on a Black US Attorney and a Black Treasury Agent, Duke says he is being attacked because

Duke said he lived part-time in Moscow, somewhere in northern Italy and, at times, Austria. He was still trying to maintain his standing here, and after two years he came back to the States to undergo yet another recreation of himself--as jailbird. Duke did a 15-month stint in jail after pleading guilty to mail fraud. He entertainined a bid for congress when he got out in May 2004, but later nixed the idea.