Pretty much anyone who follows the WP scene could tell you about the racist band Rahowa, for in its heyday of the early to mid 90s it was one of if not the most popular white power band out there. Fronted by George Burdi, or as he preferred to call himself "George Eric Hawthorne," Rahowa put out two albums, which were recorded for the record label Burdi founded, Resistance Records. Tax raids, incarceration, and growing up on the part of Burdi, who now renounces his racist past and now fronts a multiracial band called Novacosm, brought an end to Rahowa, although Resistance, as many of us know, is now in the hands of the National Alliance.

One of the more interesting songs Rahowa put out was the song "Third Reich" When others cite this song they talk about how terrible it and in particular its lyrics are. Yeah, they are pretty bad, but that's not what makes it interesting. What does it for us is that for all the bravado about white superiority in their music, Rahowa could not even do this song without starting it off with the riff from Chuck Berry's Johnny B. Goode! Even Rahowa knew what side their bread was buttered on, and that brings us to the subject of this entry, one of the guys who played that song on stage. We don't know much about what happened to the other idiots who were in that band, but we do know about one. His name is Eric Fairburn, although on stage he was Eric Wolf. He played rhythm guitar for Rahowa, and while Burdi got out of the scene, he is still very active in it. 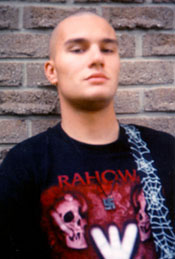 In April 1997, Wolf was not only playing for Rahowa, he was also working for Resistance Records. That was when the raids on the company took place that pretty much signaled the end of the Burdi Resistance era. In Windsor Ontario, OPP (that's Ontario Provincial Police) snatched Burdi up on a 1993 assault charge and for violating the anti-hate statutes in Canada. In Detroit, Officers wearing bulletproof vests approached the home with guns drawn shortly before 10 a.m., forced their way in, and seized boxes of tapes, records, T-shirts, business records, cassettes, computers and other items. Wolf was quoted at the scene by a newspaper article crying about how "These allegations are simply bogus." And "If we had an anti-racist publication, I don't think something like this would be happening." Tell that to Sherman Austin.

Eventually all of this killed the band although they tried to go on briefly without Burdi unsuccessfully. Wolf went on to edit an email newsletter called the Wolfreign Update. He also was one of the founding members of the Hoosier State Skinheads (now called the Vinlander Social Club), which formed out of the Outlaw Hammerskins (OHS), which themselves are a bunch of boneheads who were kicked out of the Hammerskin Nation (HSN). Somewhere along the way he found someone out there must have had even less dignity than he did because that is the only way this guy could have scored a girlfriend.

Turns out however, that this girl was the ex of someone down with HSN, Anyway, this ex was none too happy about Eric screwing his former old lady, so in January 2004 he went to his house with a friend to confront them Eric came out of the home he shared with his girlfriend, words were passed, and the HSN associate became a human pin cushion thanks to Eric wielding a knife.

This episode sparked a bit of a war between HSS and HSN, and because the Keystone State Skinheads (KSS - don't you just love all these initials?) were tight with both crews (but closer to HSS), they were concerned that there would be some problems holding the show they had planned for the Jan. 17, 2004 in Pennsylvania. In the end, they postponed the show until March, and they held the makeup date on the same day that HSN held another WP show in Florida, splitting up the two camps. Police eventually shut down that makeup show because organizers reportedly were selling alcohol without a license.

Eric Fairburn crops up quite a bit among the Vinlander crowd, especially after he became a target of Bill White and his lunacy. On a website closely aligned with him, his personal information was posted, including pictures of his home. That might explain why he was one of the people beating the hell out of members of Bill White's National Socialist Movement at Nordic Fest 2006. According to the new info, he is now living in Virginia.