In 2015, a young man named Mohammed decided he was going to work with antifascist and progressive groups particularly in New York City to fight an anti-immigration group in town. Soon he was going around the country trying to work with similar groups and networking with them. But no one will work with him now because he has been exposed as a neo-Nazi that was giving the information he received to neo-Nazi groups. Now this is particularly compounded by the one thing that helped him get over: He’s a Black man. A Black Dominican man from the Hunters’ Point section of the Bronx to be precise by the name of Gabriel Diaz. This isn’t all that new, however. The sight of persons of color pushing Nazi and White Supremacist ideals is something that has been seen for quite some time now, although we will admit that when it is seen it does take one aback. In this case however, the danger that they can be was made oh so clear when Diaz decided to screw with everyone.

And it isn’t like he didn’t have a paper trail. In 2014 he got himself in trouble – and in the local press – because he would wear a Nazi swastika armband while working as a cab driver in New York City. While it is legal to wear such an armband, the New York City Taxi and Limousine Commission (TLC) has rules against wearing one while driving a cab. So he ended up getting suspended for thirty days. He then gave an interview to WCBS where he told the reporter exactly what he was about. “I’m a National Socialist,” he said from his parent’s home in the Throgg’s Neck section of the Bronx. “I believe in the natural order of things.” He then went on to do what is normally done, cry about how his freedoms were being violated and that no one ever picks on the people he hates. Well apparently he should have a word with his family because his father hated him wearing the armband so much he ended up burning it. “He’s not right in the head. He’s a quiet person,” his father told the Daily News, citing a history of mental illness and pledging to get him psychiatric help. “He never do nothing to nobody. He goes to work and comes back.”

Eventually he did get his license back, but the garage in Queens that he worked out of didn’t want him going back to the job and kicked him to the curb. “We told him he was better off going to work somewhere else,” garage president Ted Strauel told the New York Observer at the time. “He’s not working here, he’s not going to work here.” Diaz, center in the suit hanging out with other NSM members. The guy in the flight jacket with the patches in Juan Rios of Albany, NY. He says he's a Spaniard. 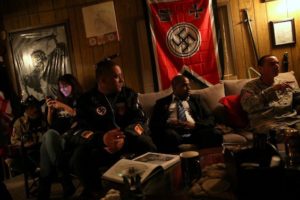 Diaz, center in the suit hanging out with other NSM members. The guy in the flight jacket with the patches in Juan Rios of Albany, NY. He says he’s a Spaniard.

He was written off as yet another crackpot, people ignored him and the story went down the rabbit hole. Somewhere along the line, he embarked on his new career as a mole for the National Socialist Movement (NSM), who he had been associating with since at least 2014. It was about a year later that he approached One People’s Project about getting involved. He has attended counter protests in Toledo, Ohio and antifa meetings in Philadelphia as well as one in Atlanta the night before the April 23, 2016 rally against the Klan in Stone Mountain, Georgia. Thing is certain circumstances caused many to be skeptical of him, and after a bit of investigation (which showed the phone number he used went to his real name), and few phone calls from the NSM public relations guy Mark Scholer – whom One People’s Project has written about in the past – we confirmed his background. He was confronted on May Day 2016 as he attempted to join with attendees of a rally at Union Square in New York City, and asked not to associate with any of the people he has been working with. He was at the time purporting to counterprotest New Yorkers for Immigration Enforcement and Control (NY ICE), the anti-immigration group that comes out every year to protest May Day. It is unknown what kind of information he was able to get from those he associated with.

With the advent of the so-called “Alternative Right” or alt-right, which has some persons of color involved with White Supremacist/Fascist politics, and the new attempt to promote the Rock Against Communism campaign started by UK neo-Nazis in the 1970s, the Nazis of Color thing that been a little more evident, but this was the first time we came across one that was being used by a certain Nazi group to be a spy. Hopefully a loved one can intervene before he pulls this shit on the wrong person, especially if he is mentally unstable, but hopefully people being aware of him and his activities will put an end to all of them if his family can’t.