Say you are a white supremacist and you need to get a foothold in mainstream politics. Look no further than the late Gordon Baum and his Council of Conservative Citizens. The C of CC boasts membership and endorsements of some major political players which includes fifty local politicians in eight states, including 34 in the Mississippi State Legislature, the late former Mississippi Governor Kirk Fordice, former Georgia Governor Lester Maddox, Senator Jesse Helms, and various local GOP activists. This is also the group that Senator Trent Lott and Representative Bob Barr were keynote speakers for, causing a bit of a firestorm around the two. Baum even endorsed his senator John Ashcroft when he was contemplating a run for president, saying he “comes fairly close to us on some of the social and cultural issues.” Add to that list the connection to such groups as the National Alliance, the Ku Klux Klan and Aryan Nations, and you have a group that is probably the most dangerous among all of the white supremacist groups in America today. That will change.

Baum, a lawyer based out of St. Louis, MO, was the Midwest field organizer for the White Citizens’ Council, otherwise known as the Citizens Councils of America (CCA). This group was founded by Robert Patterson in the wake of the Brown v. Board of Education Ruling in 1954 outlawing “separate but equal” segregated school systems. Known as a “white-collar Klan,” the CCA actively pushed segregation in the South, forming white-only private schools and boycotting black merchants who supported desegregation and voting rights. In the 1970s the CCA was all but dead, but then came the 1980s and Ronald Reagan. In 1985, Baum, along with Former Gov. Maddox, Rep. John Rarick (R-La.) and a few others started the C of CC. 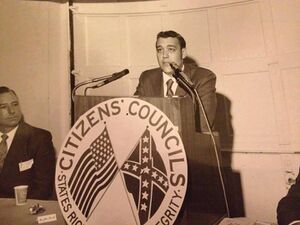 Within a few the C of CC started to attract right-wing activists, pundits and politicians, and they were able to command such a respectability that their national conferences were broadcast on CSPAN. There you can see the cream of the crop of suit-and-tie Nazis, pushing a white supremacist agenda with a intellectual bent to it. Among them have been Steven Barry a retired Army Sergeant, who runs a racist group called Special Forces Underground, Jared Taylor who with his American Renaissance newsletter maintains such a close relationship with the group it is as if they are a single entity, and David Duke who Baum campaigned for when he ran for Governor.

By the way, another person who was a part of this crew was John Schmitz, reportedly the first John Bircher to be elected to Congress. He was a high-profile rightist who championed the family values mantra up until his death in January 2001. He was so notoriously opposed to sex education in schools that he would move his daughter Mary out of any school contemplating a sex education program. His morality play however stopped working twenty years before hand after revelations he had a mistress and two illegitimate children. And his daughter? Mary went on to be Mary Kay LeTourneau, the Seattle teacher who did seven years in jail for statutory rape after having two children by a 13-year-old Samoan student of hers.

These little matters of hypocrisy never stops right-wingers, so they will press on with their we-are-above-you routine regardless. The C of CC used their prominence on CSPAN and other outlets to support the former apartheid regime in South Africa, promote eugenics, and suggest that African Americans are genetically inferior to whites, attacks Martin Luther King, Jr. Day and Black History Month, and to defend the confederate flag. Baum once defended a reported member named Marshall Catterton who shot and wounded a black15-year-old named Jason Riley who tried to tear down a sign promoting the flag, saying he might have reacted “just as Catterton did” in the same situation. Samuel Francis, the late, unlamented editor of the C of CC rag the Citizens Informer (which once referred to the original Ku Klux Klan as a “vigilance committee”), has said that the “war” over the flag is about race. “It is about one race forcing another to abandon its symbols, heroes, and songs, and the institutions they stand for and about forcing it to accept?the domination of the first race,” he wrote. Sadly he fails to consider the fact that the two races are pretty much united against the flag.

While we are on the subject it is good to note that any pro-American sentiment that they express on their website and in their newspaper these days is a phony one. Consider the fact that at one conference in Jackson, Mississippi. Gov. Fordice and the roughly 300 people present stood and sang along as “Dixie” was performed, but found their seats during “My Country, ‘Tis of Thee.” The reason for any patriotism is not for a love of America but their hatred of people of color, especially those who are not from America. The C of CC also hates immigrants with a passion (well, the non-white ones at least), and to that end has put out propaganda suggesting that Mexico has declared war on the US, attempting to reconquer the Southwestern US by crossing the border. Although they have called for stricter immigration control, they have also pushed for the US to be fragmented into smaller, racially-oriented nations, and have written reports on how this will be done. With the events of September 11, 2001, Baum & Co. have decided to launch a campaign against, as their website puts it, “Dirty Rotten Arabs and Muslims.” Although they recognize that America’s foreign policy as it pertains to the Middle East is not exactly winning new friends in the region, they are using the opportunity to extend their anti-immigration stance, calling for all foreigners, including those who are now legal citizens, to be sent back to their countries of origin. “Expelling all of them may not prevent future terrorism for sure, but it will certainly help, and will re-assert the important principle that this is our land, not the whole planet’s,” says a recent editorial of the Citizens Informer. Guess it is “our land” when it is helpful to their argument, but don’t expect them to stand for “My Country ‘Tis of Thee.”

Now with politicians rubbing elbows with the likes of David Duke and Gordon Baum, eventually the bottom had to drop out, and since the Republicans were so high and mighty about President Clinton’s indiscretions during the Monica Lewinsky scandal, some folks felt like digging into their trash as well. Enter Trent Lott and Bob Barr. Barr, who recently represented National Alliance member Chester Doles in his trial on weapons charges, spoke at their conference in Charleston, South Carolina and his credibility in the position of House Judiciary Leader was questioned. Lott has more of a history with the C of CC. He has written for the Citizens Informer and has had a long-standing relationship with the group, spoke at its 1992 conference, saying, “The people in this room stand for the right principles and the right philosophy.” Later this moron said he had “no first hand knowledge” of the group and radio talk-shit hosts like Sean Hannity went on their indignant tirades about how wrong it is to call Bob Barr racist. That’s right, just Bob Barr. Hannity left out Lott’s name, not just once but numerous times during his show. If Barr had more of a history, Hannity probably would not have much to talk about. The Doles representation furthers it, but that happened a few years after the fact.

After this bit of news, the C of CC was finally in the microscope. The Log Cabin Republicans, a GOP gay-rights organization, and then-RNC Chairman Jim Nicholson condemned the group, saying “This organization profanes the legacy of Abraham Lincoln, and bigots must have no place in the Party of Lincoln (of course, Lincoln was a bigot himself and supported white supremacy).” NAACP Chairman Julian Bond noted that no white leaders have publicly come out against the group. “The Chairs of the Republican and Democratic Parties – to their credit – issued separate statements condemning the CCC and membership in it,” he said. “Tragically, they stand-alone. Instead, speaking out against bigotry has been left exclusively to African Americans – the NAACP, the Rev. Jesse Jackson, Jr., and a few columnists.” Rep. Kennedy then challenged Barr in the House Lobby, calling him a racist. When Baum appeared on the morning CSPAN call-in show one day, someone noted that the C of CC website was coming from a server found on Capitol Hill! That has since been changed.

These days, the C of CC does not have the momentum they had when no one knew who they were. There are still politicians involved with the group, mostly from the South. In 2003, former RNC Chairman Haley Barbour was seen in a picture with C of CC members at one of their events, which he spoke at as a candidate for governor of Mississippi (he won). Although his Senator Trent Lott caught all kinds of hell in the media for this, Barbour used the same line that Lott used: he knew nothing about the group. He also said he is not going to distance himself from them. This is an indication that there is a little mainstream strength that needs to be curtailed. Regardless, Baum and his group has been on the run as he learned on Sept. 30, 2006, when a picnic the C of CC held turned into a C of CC smackdown when antifa paid the event a visit and got into a row with everyone there. It’s been pretty much a steady decline in recent years, and when Baum died on March 5, 2015, he did it knowing a Black man was running the country.