Jason Kessler is a blogger based in Charlottesville, Virginia, organized the Unite the Right rally on Aug. 12, 2017 that turned into a riot courtesy of the White supremacists he invited, resulting in the death of one woman who was opposing them when one of the neo-Nazis plowed his car into a group of people. Kessler, who has also written for the unsavory right-wing rag Daily Caller. was and still is trying to become a media personality on the right while making his hometown a breeding ground for hate.

Kessler’s been throwing in with famous-for-getting-punched Richard Spencer. Spencer spoke at a rally organized by Kessler and others on May 14, 2017, supposedly a rally to protect a statue of Robert E. Lee in downtown Charlottesville. The city already plans to remove the statue, but Kessler is using the issue to stir up racist ire in his town.

The torch-lit white supremacist rally became national news. (They weren’t real torches, mind you, but college-boy tiki torches, the kind you buy at Wal-mart.) What went under-reported was the fact that it was everyday people in the neighborhood, not an organized counter-demonstration by any group, that cut their event short. Angry onlookers and passersby began challenging the demonstration, causing the participants to disperse. The next day, after the Mayor of the town had condemned Kessler’s event, groups on the left did organize an anti-hate counter-demonstration.

Kessler couldn’t leave well enough alone. He showed up at the counter-demonstration with a bullhorn to yell at demonstrators and “incite violence,” according to local police. Kessler assaulted a woman of color, resulting in her being thrown to the ground, and assaulted another woman, according to Charlottesville activist Pam Starsia, and he also walked over to attempt to pull down a banner.

Bad move, Kessler. He was arrested and charged with disorderly conduct. 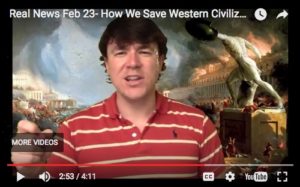 Kessler creates frequent video rants, such as this one on “How We Save Western Civilization” in which he expresses anti-immigrant views and speaks of the need to “take back the GOP” from “cuckservatives.” He also announces his intention to post one video each day, a feat which he’s obviously failed at.

Kessler apparently has had other problems controlling his violent tendencies. Two days after the Inauguration of Donald Trump, he was collecting signatures for a petition to harass local Charlottesville politician Wes Bellamy, who is black. When a local man, James Justin Taylor, criticized Kessler for his petition, Kessler punched Taylor square in the face. Kessler initially claimed that Taylor had been the aggressor, but lo and behold, the attack was caught on the security camera of a nearby business. The footage proved that Kessler was lying and showed Kessler angrily attacking Taylor. Kessler was found guilty of assault and sentenced to 50 hours of community service and a suspended jail sentence of 30 days.

In 2017, Kessler founded a 501(c)4 organization he calls “Unity and Security for America,” and he serves as the president.

Kessler has a degree from University of Virginia in Charlottesville. In 2017, Kessler was 33 years old. He fancies himself a writer of fiction and poetry, and has had a failed attempt at getting a novel published about a homeless man with dwarfism who wins the lottery.