Those who called themselves Tea Party activists when that was a thing tried to suggest that they only march and rally because of economic and fiscal concerns, never social and cultural issues. Someone forgot to tell teabagger Jeff McGeary that, given his remarks during the April 6, 2011 meeting of his Thomas Jefferson Club in Bucks County, PA:

And if those same teabaggers are miffed that people keep pointing out the racist elements in the Tea Party scene, well Jeff McGeary isn’t helping. See, the two speakers that he was referring to were noted white nationalists Peter Brimelow of the hate site VDARE, and former Jesse Helms aide Louis March, a past speaker at American Renaissance and Council of Conservative Citizens conferences who touted as successes overseas what hate groups like the British National Party and France’s National Front were doing in their countries. McGeary is one of those teabaggers that have been playing it coy for a few years now, but when this meeting took place it pretty much put a spotlight on what he and his Thomas Jefferson Club is really about.

We should point something out here, because it comes up a lot. When conservatives venture into the more racist fare the code words start flying so they can say things that would otherwise get them skewered by the general public. The talk about Western civilization or Western culture will be one of those examples particularly because they never really explain what that means. Curiously, they are not refuting the contention that when they say “Western civilization” they mean White people. So when it comes up you know you may be dealing with that very special kind of conservative: the White supremacist – whether or not they say so. At the very least, until these conservatives stop getting mad when people ask them what they mean (and most importantly if they include people of color in their definition of Western culture) you should smell a rat when you hear that term.

The whole thing about defending “Western (read: white) Civilization” is Jeff McGeary’s main focus. He has spoken at several teabagger events over the past few years, at each stop pushing for the defense of “Western (read: white) Civilization”, often railing against diversity, and using the issue of illegal immigration as a jump-off to do so. The Thomas Jefferson Club blog features articles that are your standard conservative fare, along with those that decry the rise in nonwhite populations in places like Britain, declarations that “Multiculturalism has failed” by regular blog contributor David J. Hentosh, attacks on the Southern Poverty Law Center as “the shame of America” and another rather stupid article by the aforementioned Hentosh where he takes anti-war activist Cindy Sheehan to task for saying the United States government faked Osama bin Laden’s death with this suggestion: “Isn’t it time to ‘out’ Cindy as a racist for not believing Obama? There seems to be no other valid reason according to the far left – or even the near left. Racism is the only reason.”

This screenshot of the Thomas Jefferson Club Blog highlights four curious links, all of them for groups connected to either neo-Nazis or White Nationalists.

The irony of this is the fact that one look at the Thomas Jefferson Club’s blogroll would suggest that Hentosh is projecting a bit there. Among the more tepid conservative links are those for VDARE, the white supremacist National Policy Institute headed up by Dick Spencer and and Western Voices World News, a white supremacist news site run by something called European Americans United, whose members push for a white nationalist government,note in their Consitiution that group membership is restricted to those “with no physically discernible admixture of non-European ancestry”, features on their website interviews with white supremacists like Tom Sunic and was registered with the same email address as the Sacremento chapter of the neo-Nazi National Vanguard. With these kinds of associations, it’s not like McGeary doesn’t try to hide anything. It’s simply the fact that no one noticed until now.

A resident of Newtown, PA, a suburb of Philadelphia, McGeary went to Valley Forge Military College, where he founded that school’s chapter of College Republicans, West Chester University of Pennsylvania, where again he was involved in the College Republicans, and LaSalle University where he received his MBA. He currently works as an Executive Sales Representative at Sanofi-Aventis, the Paris-based pharmaceutical company in their Malvern, PA research and development offices, and is a Captain in the Army Reserves, with him listing his headquarters on Linkedin as the United States European Command, Plans and Operations Center in Stuttgart, Germany.

McGeary started the Thomas Jefferson Club in 2008, a month after Barack Obama was elected President and just in time to incorporate it into all the teabagger nonsense a few months later. At this point, he had made himself a name as a member of not only Pennsylvanians for Immigration Control (PIC), but also Ron Bass‘ New Jersey-based United Patriots in America (UPA). UPA has tried to hide its racist leaning in the past but once Bass opined that “The perverted Civil Rights ideology has infected our entire American civilization” and that “It’s time for White America to stop being cowards”, not to mention the more crackpot things like how Michelle Obama black and red 2008 Election Day dress Michelle Obama’s black and red Election Night dress was “subversive” (“Black and red are the traditional color s of African Anarchism”), and that people of color taking power is a problem (“If your upset that the Open Border Blacks and Latino Civil Rights movement groups could move into the White House this January you all have only yourself to blame.”), it was a little hard to do after that. In 2009, McGeary was listed as a speaker for a May 2009 anti-immigration rally in Shenadoah, PA, where five white teens beat and killed a Hispanic man (this crowd supported the teens). He was listed as a member of both PIC and UPA.

Feb. 2011 - Jeff McGeary, third from left, poses with a group on the National Mall in Washington, DC that includes Vlaams Belang member Filip DeWinter standing next to him second from right.

But there are other groups that McGeary connects himself with. One of them is Vlaams Belang, the Flemish nationalist and secessionist political party which was outlawed in 2004 under its previous incarnation, Vlaams Blok as a “criminal organization” due to its racist, anti-immigrant views. One of VB’s top members, Flemish Parliment member Filip DeWinter has been running with neo-Nazis for over twenty years, declaring in 1991 that “Vlaams Blok chooses a white Europe!” and even attempting in 1988 to hold a small rally paying tribute to 38 Flemish SS collaborators who fought for Nazi Germany at their graves before German police stopped him and his crew saying only German citizens were allowed to enter the cemetery. McGeary loves this clown and has met with him several times. One picture of him with DeWinter and others on the National Mall in Washington, DC was posted on McGeary’s Facebook page on Feb. 8, 2011. That would be three days after DeWinter gave a speech on behalf of the scuttled American Renaissance Conference in Charlotte, NC and one day before the Conservative Political Action Conference started.

YWC is another group that McGeary is close to.

And that was where the white nationalist student organization Youth for Western (read: white) Civilization (YWC), who also just loves Vlaams Belang and Filip DeWinter, held a workshop where several white supremacists were seen in the audience. YWC is another group that McGeary is close to. YWC head Kevin DeAnna gave a presentation at a Thomas Jefferson Club meeting in November 2009, and in YWC’s only conference held in June 2011, McGeary returned the favor by speaking there, as a Facebook post of his noted at the time.

While we are at it we should say that he also loves the aforementioned French fascists of the National Front. National Front founder and leader Jean Marie Le Pen retired in 2010 and turned over control of the group to his daughter Marine, and McGeary is all about her and her party. 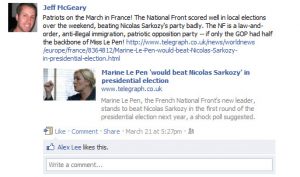 While we are at it we should say that he also loves the aforementioned French fascists of the National Front.

For what it was worth, McGeary himself staged a run for Congress in 2010 to take Pennsylvania’s 8th District seat from Rep. Pat Murphy. Murphy did indeed lose that seat, but McGeary wasn’t the Republican who did it. Mike Fitzpatrick was. McGeary didn’t even place in the primary, despite some minor support by some of the anti-immigration folks out there. When that failed, he just stuck with the Thomas Jefferson Club and the teabagger scene, and cultivating his place among the racist right. Peter Brimelow for one was happy with what he saw when he spoke there in April, writing in an article about that day, “I was very impressed by the audience in Newtown, which included many VDARE.com fans.”

We should stress that we have found several groups that call themselves the “Thomas Jefferson Club” the one that we have focused on here you will find noted as based in either Newtown, PA or the “Greater Philadelphia Area”.

Jeff McGeary doesn’t get a lot of traction beyond the local Trump Supporter set these days. Last time we saw him, he was in the background at a “March for Trump” rally at Independence Hall in Philly, a rally that also brought out the neo-fascist Identity Evropa en masse. It is not as if the local media is seeking him out or anything. But you know us, you know we don’t like any of these clowns going under the radar, especially this crew of Pennsylvania racists that have been hiding behind anti-immigration campaigns to promote that paleoconservative racism we have seen pushing itself into the mainstream over the past few years. If Jeff McGeary is around, know that he is a liability if you ever want to be taken seriously.