Pontifex Maximus (leader) of the World Church of the Creator. Born on July 27, 1971, Hale was attracted to National Socialism at an early age, reading such works as "Mein Kampf" and "The Rise and Fall of the Third Reich". In the 8th grade he and a group of friends formed a group called the "New Reich". After High School he entered Bradley University in Peoria, Illinois. In 1993 he graduated with a BA in Political Science. He gained some attention during his tenure at Bradley University for distributing fliers on campus for his "American White Supremacist Party", a small campus group of maybe 7 to 8 members. It was also during this time that the Church of the Creator and its teachings of something called Creativity came to his attention. 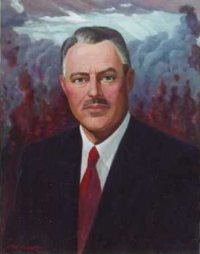 The Church of the Creator was founded in 1973 by Ben Klassen, the man who reportedly invented the electric can opener, and one with a long history of far right affiliations. On August 6, 1993, Klassen did us all a favor and committed suicide by consuming four bottles of sleeping pills. A hand-written suicide note justified his act by referring to chapter 59 of "The White Man's Bible", which describes suicide as "an honorable and dignified way to die for any...of a number of reasons, such as having come to the decision that life is no longer worthwhile."

We only wish he could have come to this decision sooner. His suicide came weeks after federal and local police agents in Los Angeles arrested eight individuals, some with ties to the Church and accused them of plotting to instigate a race war by bombing the First African Methodist Episcopal Church and by assassinating Rodney King on August 4, the sentencing date for two of the cops convicted of violating his civil rights in that infamous beating. They also had targeted for assassination leaders of the NAACP and the Urban League, Louis Farrakhan, Al Sharpton, Easy-E, members of the group Public Enemy, and unspecified Jewish leaders. One of the minors in the group had been charged in a pipe bomb attack against one of the members of the "Spur Posse" a crew of friends in the early 90s who awarded points among themselves for sexual conquests.

After Klassen death, during a period of reconstruction, the Church of the Creator became known as the World Church of the Creator. And Hale was leading the way. In May of 1991, Matt Hale was arrested on a charge of "Obstruction of Justice," a class 4 felony, after an altercation following a demonstration. In October of that year, he was found guilty, but the conviction was overturned on appeal in December 1992. That same year he became the leader of the newly formed National Socialist White Americans' Party. It was disbanded in 1995. He appeared on several national talk shows during this time.

In 1995 he ran unsuccessfully for a seat on the East Peoria City Council. It was after this defeat that he decided to steer away from politics and become more active with The World Church of the Creator. He publicly announced his convictions and began to rise within the church ranks. The church was in total disarray following the death of its Klassen, and the many scandals surrounding the various leaders and factions whom had tried to gain control. But, on July 27th 1996, at the age of 24 he was appointed the "Pontifex Maximus" and has served in this position since. 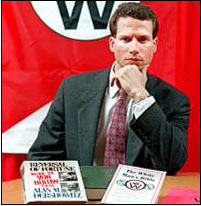 Hale with copy of "The White Man's Bible"

Hale graduated with a degree in law from Southern Illinois University in May of 1998. That is when the fun began for Hale and his Church. In January, 1999, Hale was notified that the inquiry panel of Illinois Board of Admissions had decided not to grant him a law license due to his racist and anti-Semitic beliefs. In the WCOTC's newsletter, The Struggle, Hale looked upon this as a windfall.

One of those messengers was a guy named Benjamin "August" Smith who was called in this same newsletter issue "Creator of the Year". In a story on him he said

During the July 4 weekend, his "contribution" at the age of 21 was to go on a three-day, two state shooting spree, killing two and wounding eight Asians, blacks and Jews, before killing himself. Another windfall for Hale, we suppose. Since then Hale has been holding "public meetings" in libraries across the country, and most of the events have been scenes of loud debates, brawls, and flat out riots, one of them involving Hale, his head and a 2X4. If you have any question as to why read the following:

Hale on Blacks and other Minorities:

Hale on the Racial Holy War:

It was one of these public meetings that was the catalyst for one of the most explosive events in recent time between neo-Nazis and anti-racists. On January 12, 2002, Hale brought WCOTC to York, Pa., and attracted three other notable white supremacist organizations to the little town. Anti-racists, along with members of the commuinity clashed with members outside the Martin Library where Hale was holding his meeting, pretty much dispatching them.

Since then Hale has been turned away from a number of libraries, including York for his return, but he has threatened a lawsuit to be allowed back in. He also made a since aborted run for local office again in his town of East Peoria. He has even moved out of his father's house to live with a woman named Peggy Anderson, someone he was reportedly supposed to have married then divorced within weeks.

Things seem to be winding down for the group, however. On January 8, 2003, Hale was supposed to appear in court to answer a contempt of court charge slapped on him by the judge presiding over a trademark infringment case that he lost, which cost the WCOTC their name. Hale refused to turn over any and all materials bearing the contested name, hence the charge. As he came to the courthouse to make his appearence - expecting to be jailed on the contempt charge, federal agents nabbed him and charged him with solicitation of murder.

According to law enforcement, he attempted to find someone to kill the judge! On January 11, 2003, a day short of the year anniversary of the York, debacle, the WCOTC rallied in Lewiston, Maine against Somali immigrants, but only a fraction of the prior year's rally attendees made an appearence. Hale currently sits in that jail cell today, facing a maximum of 30 years in prison, and his disciples are in disarray.

On April 26, 2004, Hale was found guilty of four of the five counts, and his "flock" has scattered to the wind, fearful that if identfied, they will have to pay the $200,000 fine imposed by Judge Lefkow. Observers feel that this was the nail in their coffin, and just like the electric can opener that Ben Klassen invented, it is only a matter of time before Hale will be a relic of the past.

July 2020, Hale was transferred to the United States Penitentiary, Marion in Illinois.