Decked out in a Thor’s Hammer necklace and tee touting racism, Nicholas Allen Gervasio, a resident of the Canonsburg PA area, is a well established member of the Pennsylvania based white supremacist group Keystone United (KU). Formerly known as Keystone State Skinheads, the group changed their name to Keystone United in 2009 in an effort to legitimize their hate organization with the public. Gervasio has confirmed his membership to KU over the years via his presence in various group photos at different KU sponsored events. Most recently being the May 2018 KU gathering outside of Pittsburgh, PA.

KU members are known for racially motivated violence as recently as July 2018, where a black man was attacked inside his local bar in Avalon PA by six KU associates. Since 2001, the history of the organization has been to engage in various violent situations and to work with those that have or would later eventually be murderers. Incidents like this are a reminder that KU still operates as a racist bonehead crew and not as a “rights advocacy group” that they claim to be.

Over the years KU has attempted to reinvent their hate group in the public eye, distancing themselves from the image of racist “skinhead”. In their online presence they say they are “white advocates” who want to “combat degenerative influences in society”. They pretend to be taking back the streets from drugs and drug dealers, and providing a “productive outlet for whites”.

Nicholas Allen Gervasio from 10/01/14 arrest by Chartiers Township PD after allegedly pointing a handgun at a Hickory woman who was checking on her friend, Gervasio’s girlfriend at the time. He was later found guilty on multiple charges related to the incident.

Gervasio is no stranger to the drug trap and harassment of others, as noted by the graduation of his legal offenses below. His rap sheet includes the following convictions:

In January 2017, while serving time for the August 2015 drug arrest, Gervasio attempted to gain early parole but his request was denied. However, in March 2017 his request for early release was granted subject to treatment at Cove Forge, a drug addiction treatment center in Williamsburg, PA. 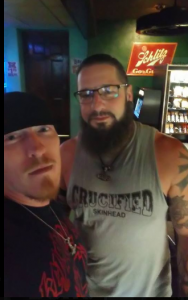 Nicholas Allen Gervasio (left) in 2018, one year after being released from prison on drug charges. Pictured with another KU member Travis Lee Cornell (right).

Gervasio currently works at Spadaro Construction LLC out of Canonsburg, PA. The company states they are a 100% women owned business. Of note, Keystone United prohibits women from joining.

If Gervasio has celebrated a one year clean date since treating at Cove Forge, he clearly is not practicing sobriety by being a member of a white supremacist group and holding racism so close to his program of sobriety. At their core, racist groups blame others for their social problems. Drug related issues are one of these social problems