Sooner or later we were going to have to put Paul Fromm up here, so here he is. This guy has been around for quite a while. He used to be a teacher until he was fired for including racist and anti-Semetic ideology in his lessons (not exactly proscribed by the Ontario curriculum). He's the founder of a number of groups, including Canada First Immigration Reform Committee, Canadian Association for Free Expression, and Citizens for Foreign Aid Reform. He's also closely associated with one of Canada's newest fascist groups, the Canadian Heritage Alliance

Fromm seems to have first entered into the world of organized racism while a student at the University of Toronto. In 1967, he co-founded the Edmond Burke Society, an "anti-communist" organization, which eventually morphed into the even more extreme Western Guard in 1972. Early members of the Western Guard, a who's who of Canadian fascism, include Edgar Foth, Wolfgang Droege, John Ross Taylor, and Klansmen like Paul Hartmann.

By 1979, Fromm had formed another organization called the Citizens For Foreign Aid Reform (C-FAR). This organization has published the works of Elmer Knutson, Phillipe Rushton, and Doug Christie (an infamous lawyer who appears to be where ever a bigot is before the courts... and whose own writings confirm he is of like mind with those he defends).

On December 8, 1990, Fromm attended and spoke at a Heritage Front rally to commemorate death of Bob Matthews, an American racist killed during a shootout with the FBI after being sought in connection with several murders and armed robberies. Fromm stood beside a Nazi flag after a performance by Burdi's band RaHoWa and speeches by the neo-nazi group the Canadian Alliance and the Women's Aryan Union. A videotape of the rally was given to the media by the Canadian Jewish Congress, and Fromm was disciplined for his involvement by his employer, the Toronto Public School Board." (http://www.web.apc.org/~ara/documents/frmed.htm) 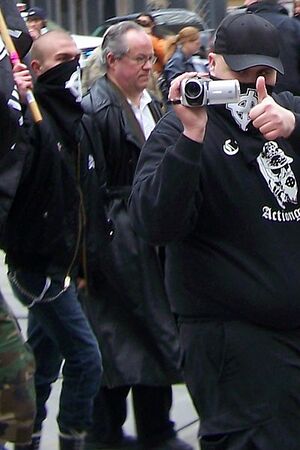 Eventually, Fromm's activities and increasingly bigoted rhetoric (he had attempted to maintain a mainstream image) resulted in his dismissal from the Peel Board of Education on February 27, 1997.

Fromm is still very active in the racist movement in Canada and internationally. He has spoken at conferences in the United States sponsored by the Institute for Historical Review, The Council of Conservative Citizens, the Barnes Review, and others. He?s also very active in the current Zundel deportation hearings in Canada, organizing protests and attending almost every hearing thus far. Sources used to write this article: http://www.web.apc.org/ ~ara/documents/frmed.htm http://www.nizkor.org/hweb/people/ f/fromm-paul/paul-fromm.html Other links of interest: http://www.users.bigpond.com/ smartboard/decline/frommexp.htm http://www.ainfos.ca/02/ jul/ainfos00273.html http://www.aranet.org/news_ecara1.php http://www.bnaibrith.ca/publications /audit1997/audit1997-04.html http://www.nowtoronto.com/ issues/2000-12-14/newsspread.html