In 2003 the white power band Blue Eyed Devils played their last show. Formed out of an earlier group called Nordic Thunder (whose lead singer Joe Rowan was deprived of his useless life courtesy of a bullet on his 22nd birthday), they took all their Earth Crisis/One Life Crew/Ignite influences and reinvented themselves into a white power hardcore band that sucked even more than the band they all came from. Regardless of their lack of talent, they were able to saunter on for a few years, enduring repeated lineup changes and beatdowns in the street (well, that was mostly their lead singer Drew), until their drummer Ryan Huber, picked up and left for Houston, Texas. His brother is Robert Huber and he played guitar for the band.

Now he is trying to live a nice quiet life in Newark, Delaware with his Polish national wife, who he met at a show when his band toured her country and reportedly married when she came here and lived as an illegal immigrant until they tied the knot. Since he left the band he grew his hair out and always wears long sleeves so no one sees his neo-Nazi tattoos and pegs him. He also gets very nervous talking to strangers on the street about his extracurricular activities, and that is understandable. He may be concerned he would end up on website like this. We can understand that concern all too well. Pity. 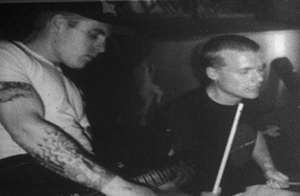 Robert Hube on L, playing with his brother Ryan, on drums, in a Blue Eyed Devil Performance.

Huber, who started playing guitar when he was 15, along his brother Ryan and a few friends formed Nordic Thunder and was one of the first bands on Resistance Records when it was still owned by George Burdi, then of the band Rahowa and currently reported to be a reformed racist. On October 1, 1994, the band was in Wisconsin for a tribute show for the late, unlameted Ian Stuart Donaldson of the band Skrewdriver. After the show Nordic Thunder singer Joe Rowan and a few of his bonehead friends went to a convenience store and got into a scuffle with three black patrons. One of them allegedly shot and killed Rowan, but according to reports he was never charged with the crime because the prosecutor could not find credible witnesses. We can understand that. The only witnesses were boneheads. Would you trust the word of a bonehead?

From this Nordic Thunder came back as Blue Eyed Devils and released their first CD on Tri-State Terror Records, a label formed by Ryan Huber. The band and Tri-State Terror built a huge following in their circles, especially on the East Coast, and it is said that they are the ones who brought hardcore to the White Power scene. In the end Ryan decided it was time to break away not only from the band, but the label as well.

From what we were told, the bullshit Ryan didn't like might not have stopped with the WP scene. He keeps his distance from his old friends and even his family. Robert has reportedly said that Ryan doesn't even come out to family get-togethers.

Robert tried to saunter on, although with a lowered and in some aspects more mainstream profile. The last Blue Eyed Devils CD was put out by Final Stand Records, which is owned by Robert. He also owns a second label. Fire Forged Records is devoid of any neo-Nazi material and is pure mainstream hardcore. When he books shows for these bands, they would often be billed with known anti-racist bands. Huber called himself a non-practicing Nazi for awhile.

He has a Physics degree from Penn State and is currently working on his PhD at the University of Delaware. He reportedly works doing research but it isn't really paying the bills. Short on cash, he once had to cancel a tattoo appointment with Terry Manning at Wild Card Studios in Wilmington, Delaware, who does most of his white power tats. We bet that just chokes you up, but before you start donating to the "Save the Robert Huber Fund," you should know that he didn't really leave the WP limelight, but simply downplayed his involvement. 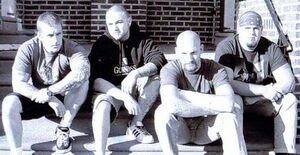 Robert Hube in the band Teardown.

In November of 2003 Robert and his old B.E.D. lead singer Drew started another WP hardcore band called Teardown (not to be confused with a metal band by the same name from Finland, or the metal band from Brazil who also has the name). The original lineup didn't last too long before members were replaced and Robert found himself the only original member of this band. The band's website does not mention any of the past bands the members past or present belonged to, saying instead that they were formed "by a couple of friends that had played together in a few local bands over the past several years", and that "Bob has played in variety of local hardcore bands, and has traveled extensively in America and Europe to play shows."

Apparently they didn't count on folks from the hardcore scene to pay attention, but they did. This was apparent by a few posts to the East Coast Hardcore website.

On the board for Hatebreed, an anti-racist but pretty apolitical band that Teardown rips off, there is mention of when Teardown does attempt to play non-WP shows, they are "well known for getting booed and shitted on." Nice track record for a band that has been around for just over a year! No doubt Huber & Co. will see a little more shit in the near future.