ecently five black veterans filed a lawsuit against Kellogg Brown & Root, a subsidiary of Halliburton, of engaging in racial discrimination. A spokeswoman for the oil giant responded to the suit by saying, "Halliburton embraces diversity and believes it is vital for our continued success. It helps provide a work environment where everyone is valued and differences are viewed as assets, not liabilities." Well, we are going to suggest otherwise. In addition to everything else that has made Dick Cheney's old company the center of controversy, along comes news that among their employees is a major player in the WP scene out there. Roger Williams is the Western Regional Coordinator of the National Alliance. Erica Hoesch dated him for a spell, and she tipped us off that he is also a Market Analyst for Halliburton working in their Headquarters in Denver, CO. When we were given his email address and saw it was from Halliburton.com, we had to make sure. We called and they said that Roger Williams does indeed work there - on the ninth floor. When we told them why we were asking, we were directed to the Human Resources office, then to the Human Resources Manager's voice mail. We left a message but heard nothing back. That was January. Anti-war activists also encountered Williams while protesting Halliburton as he was arriving to work.

Roger Williams with Erica Hoesch. To Roger from Erica: "Honey, weren't we cute?" 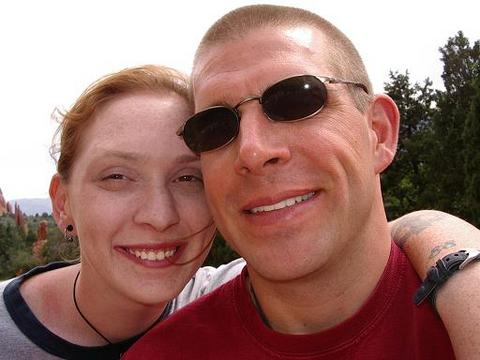 Instead of sitting on the information, we felt we needed to tell everyone what we know about this guy. With the recent NA flyering in and around Denver, particularly at the Kobe Bryant Case in Eagle Point, CO, it is a good idea for locals there to learn who exactly it is that is behind those activities.

Williams, 33 is originally from Houston, TX where he was the National Alliance Unit Coordinator He had to pass that torch to Martin Bartlett when in or around 2002 he transferred to Denver, CO with his job at Halliburton, but upon moving to Denver he became the Denver Unit Coordinator. This NA unit holds meetings at the library at Virginia & Wadsworth in the Lakewood area. There is also has a unit in CO Springs where monthly meetings are usually held at the library downtown. It was during this time that the Rocky Mountain Heritage Fest took place - although barely because Anti-Racist Action threw a monkey wrench into the program, causing the original venue to shut the show down on the day of the event, forcing the organizers to find a new one. One of those organizers was Jennifer Martinez, a/k/a Jen Ristau, the nazi who has been called out by her people for having Mexican roots. She once dated Williams.

In the summer of 2003, then-Western Regional Coordinator Shaun Walker became the Chief Operating Officer of the National Alliance, and Williams replaced him in his old position. "Basically, I'm a coordinator for the western states," he said in a recent interview, "and my primary responsibilities include helping to organize activities in the area, establishing and maintaining good communication among members throughout the region, acting as a spokesperson if we have any media requests, and assisting the National Office with facilitating organizational activities. If we have a country-wide effort, I am the intermediary between the National Office and members in the region."

Hoesch again, this time with Matthew McGrath, who works closely with Williams from Colorado Springs. He is a former Outlaw Hammerskin originaly from Chicago who also lived in Indianapolis for a spell. 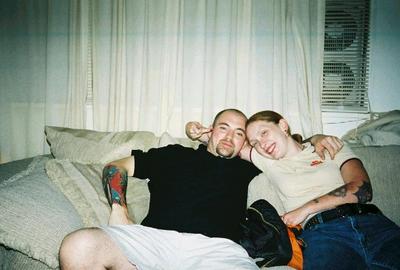 This was when the NA units out there became a bit more active with the flyering. Newspapers throughout the region reported on National Alliance flyers being found on doorsteps of residents in a number of states. One of those states was Nebraska and one NA member who was doing the flyering was a guy named Dan Schildhauer. Schildhauer worked for the Outdoor store chain Cabela's and an article was written about his flyering in the local papers. Apparently it became all the talk locally, and when he went to work the following Monday, he was suspended and later fired. Schildhauer became a cause celebre among the WP crowd who feels the firing violated his rights and Williams and Co. started a campaign to boycott Cabela's. This boycott has yet to be supported by anyone outside of the WP crowd.

With the flyering, boycott campaign and various racists doing stupid things in the region, Williams has been seen a lot in the media. That means he is real busy. It kind of makes one wonder how he can juggle a career and NA work at the same time. If it is indeed at the same time, and he is doing NA work while on the job?well, that is going to take some explaining. In the meantime, the National Alliance continues to litter the western US with their flyers and Halliburton continues exploiting the recent troubles in Iraq for billions of dollars. It would not be a good thing for either group if they were connected via Roger Williams. Halliburton must have thought so. Within a week of this Rogues' Gallery entry's publication, Williams lost his job there. They were not forthcoming with the reasons why, however. One could only guess. 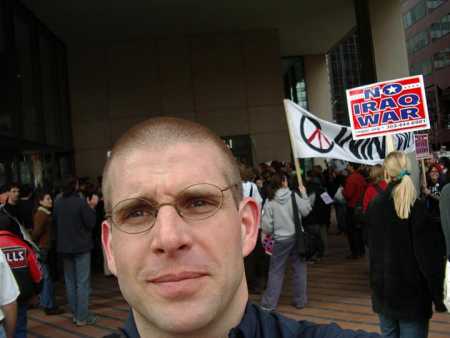 This takes balls. Williams had this picture of him taken during an anti-war protest at Halliburton - his place of employment. Denver ARA was also present at this. Question: If you are running things for the National Annoyance and you work for a place like Halliburton, why would you play yourself like this? WHY?