Back in April 2005, there was supposed to be a meeting of anti-immigration nutjobs called the United Patriots of America at a VFW Hall in Freehold, NJ. Unfortunately for them, the locals did not want them there, particularly the immigrant community, and they called for the Hall to cancel the event, which they did. Undaunted, UPA moved their meeting to a diner in Hightstown, NJ, but that was shut down by police after the mayor notified them there might be problems. On June 25, 2005, the UPA held a meeting in Bridgewater, NJ that was disrupted by the Progressive Labor Party. A week later, they held a meeting in East Brunswick, and again they were disrupted by people opposed to them.

Why all the heat on the UPA? Maybe it has something to do with the fact that they are cavorting with hatemongers trying to get into the mainstream. The Bridgewater meeting’s keynote speaker was a guy named John Clark who belonged to two groups listed as hate groups by the Southern Poverty Law Center. They give money to groups like Protect Arizona Now, which had as its national adviser Virginia Abernethy, a member of the Council of Conservative Citizens. Other anti-immigration groups in New Jersey do not want to have anything to do with the UPA.

The president of the UPA is a guy named Ron Bass, who founded the group in December 2001. He owns and operates RSA Express, a trucking company in Elizabeth, NJ. Elizabeth is a pretty diverse city with a large Hispanic population. The UPA, on the other hand, is based in nearby Linden, where the diversity pretty much goes from white to whiter to whitest. Linden is also a town known to be particularly hostile to people of color. Since we are just hearing about this guy, there isn’t much about him. 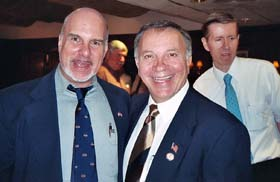 We do know that he has been hobnobbing with a number of politically shady characters, particularly those wonderful folks of the Constitution Party, the group once headed up by Howard Philips that, among other things, wants to overturn every Constitutional amendment passed since 1913, and that would include the right of women and those 18 and older to vote. His other thing is to bring the Minuteklan Project into the Garden State. At the Bridgewater meeting, there was some mention of going into airports, but that failed miserably when Win Housley tried it in San Diego back in 1995, so it is not known if they will pursue this move.

Now Bass has a lot to lose, so he is one of those guys who will deny the racist charge. Hell, the UPA even had an event to mark Martin Luther King Jr. Day this year. It’s a shame that the theme of the event was “How Illegal Immigration Severely Damages American Minority Communities”, and that the featured speakers was a guy from the once great but now phony Congress of Racial Equality, and the aforementioned John Clark! Leave it to the anti-immigration crowd to use hate to bring us together! Lucky for those who would like people like him to stop thinking they are fooling us, shit floats to the top. With the Obama administration, the anti-immigration crowd has been kicked to the curb and that made them a little testy. Bass hasn’t announced any public UPA meetings since maybe 2007, but recent emails to his supporters have become a little more interesting. The first hint that something was up was when they were in defense of what he terms “culturalists”, and raised issues like how Michelle Obama’s black and red Election Night dress was “subversive” (“Black and red are the traditional colors of African Anarchism”), and that people of color taking power is a problem (“If your upset that the Open Border Blacks and Latino Civil Rights movement groups could move into the White House this January you all have only yourself to blame.”). Then he really lost it. Using Attorney General Eric Holder’s remarks that we are a “nation of cowards” when it comes to discussing race, Bass sent an email promoting the National Policy Institute (NPI), a group of suit-and-tie boneheads with associations with the Council of Conservative Citizens and other paleoconservative groups, not to mention some funding from the eugenics-promoting Pioneer Fund, that considers itself the right’s answer to the Southern Poverty Law Center – who has listed the NPI as a white supremacist group. None of this is a problem for Bass who in his NPI endorsement wrote:

Now Bass is on some crusade against the “Civil Rights Movement” because he believes it will destroy health care, just as it destroyed the public school system and the auto industry, is responsible for 9/11, and “Certainly, there are other factors involved in the problems that our country is facing but The Civil Rights Movement is out front in destroying Western Civilization,” he wrote, in an email linking to an American Renaissance article to bolster his point. “The perverted Civil Rights ideology has infected our entire American civilization.” He is also now the NJ State Leader for some outfit called the Patriot Coalition, which holds the anti-immigration views of the more racist groups and individuals out there.

Bass tries to keep as much as possible about himself away from others' prying eyes, but he is failing miserably. Considering how long it has been since he showed up at anything his opposition is definitely scoring their hits. But apparently he really wants to pick a fight now, so he may find the fight being brought to him soon enough.

How much we will be dealing with Bass remains to be seen, but he is now aware that antifa are looking at him. After two embarrassing disruptions in less than a week, he became very cautious. Too late. He is on our timetable now, and he is definitely someone who needs to be brought kicking and screaming back into reality.