The head of the Congress of Racial Equality (CORE) since 1968, Roy Innis started off as a black nationalist, which means he was always a right-winger. CORE was not, however. This was the group who did the Freedom Rides in the sixties, and that made them the scorn of the conservatives of that time. That changed with Innis, and he his organization decidedly to the right.

CORE is the group conservatives look at as an anthesis to other black groups, the ones that correctly call them out on their bullshit. Innis has appeared on many talk shows "debating" white supremacists (see the Metzgers entry), but his beliefs actually mirrors his WP "detractors". He once referred to the then-fight against apartheid in South Africa as "the so-called anti-apartheid struggle," which has "no honest base" and is "a vicarious, romantic adventure."

This was hardly a sentiment of someone who claims to fight for civil rights, but then again neither was his support for Lyndon LaRouche. After testifying in a federal court that he'd seen no evidence of anti-Semitism in the Lyndon LaRouche organization, well after LaRouche's Holocaust denial was a matter of public record, he was pretty much discredited as some sort of leader. That is, if the support for Idi Amin didn't do him in already. He had said of Uganda's recently deceased dictator that

(of course, that presuming he meant those who remained after the slaughter of some 300,000), hailed Amin's decision to expel 50,000 Asians from Uganda as "a bold step" because "a country's economy is too important to be left in the hands of foreigners", honored Amin with a lifetime membership in his organization, and added in a 1973 interview with Africa Report, apropos Amin's hatred of Jews and praise of Hitler, that "we have no records to prove if Hitler was a friend or an enemy of black people." He denies he made that last statement.

He is on the board of advisors of the National Traditionalist Caucus, a group that primarially rallies against women's rights, particularly the right to choose, and against non-discrimmination laws against gays. He, along with radio talk-shit host Bob Grant, started the Howard Beach Legal Defense Fund in the 80's to assist the white youths who chased a black man into the street to his death in a racial attack. Grant was also invited to take part in CORE's King day Celebration in January of 1998, and many African-Americans objected, noting Grant's constant attacks and degredation of King.

Two years later, he decides to really push the envelope and while admonishing Hiliary Clinton for meeting with Rev. Al Sharpton during the National Action Network's King Day celebration, invited Austrian politician and Nazi sympathizer Jorge Haider to sit with NYC Mayor Rudolph Giuliani! Giuliani eventually had to do damage control and released a statement saying he did not know who Haider was, which was a lie because Haider just months earlier started a mini-controversy in the city because he wanted to march in the New York City Marathon, stoking the ire of the Jewish community. Innis also has a son, Niger who has also shown himself to be just as pathetic. Innis has totally destroyed everything CORE used to be. 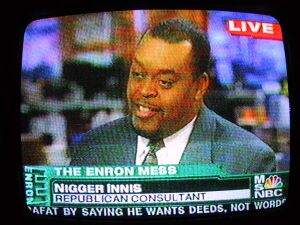 Roy's son Niger, as seen on MSNBC. We spelled his name correctly. They didn't. Proof positive that no matter how right-wing some blacks try to make themselves, there are those among the right that will always see them as...well, you know.

Turning 70 in 1994, it looks like Roy is slowing things down a bit. In recent months he has not been seen and Niger has been cropping up more.