Meet your local white supremacist tattoo artist, Scott W. Riddle. A lifelong resident of Greensburg, Riddle attended Hempfield Area Senior High School. Riddle was able to realize his dreams as a professional doodler, and opened Mark of Thor tattoo parlor at 311 Depot St., Youngwood, PA 15697. After seventeen long years of endlessly marking people with dolphins, Japanese characters, rebel flags, and the occasional swastika, Riddle closed Mark of Thor, and not long after, gifted tattoo enthusiasts and white nationalists alike with the opening of Patriotic Pain Tattoo and Body Piercing. When not working with ink, he can also be found working as a security guard at local bar The Rialto.

Scott W. Riddle shows up on many Facebook profiles and in pictures with known white nationalists. These guys are his pals. Through various social media posts he has shown that his beliefs are inline with a belief system that threatens the safety of our society to its very core. He’s shown us through a handful of social media accounts that he is quite comfortable with Islamophobia, sexism, racism, national socialism, far right ideology, conspiracy theories, western chauvinism, anti-immigration attitudes, the notion that there is any such thing as white genocide, and a get over attitude towards slavery, as well as a host of other notions he should be embarrassed to admit.

While there hasn’t been anything pointing to an affiliation with a particular group, the evidence of Riddle being a white supremacist was found publicly on the tattoo shop’s website – which has been offline since Charlottesville – the shop’s Instagram account, and both his and the shop’s Facebook page. He and his friends are proud to show pictures of his nazi symbol tattoo handiwork. 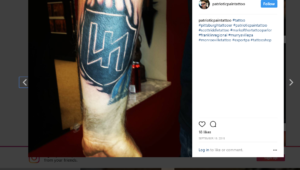 There is no intimation that Riddle has left the business of spreading white supremacy and hate. Not even as a father of two.