Now this really has got to be one of the boldest boneheads we have ever seen. Even if we are just learning about her now, someone who works as a court officer in New York City should still be wary of showing off as not only WP but as a member or supporter of a crew that's seen as a gang at the least and domestic terrorists at the most. Yes, you read that correctly. Sharon Hewitt is down with the Vinlander Social Club (VSC), who has changed their name quite a few times over the years, their first being Outlaw Hammerskins. They are a splinter group of former Hammerskins who were booted out of the original crew because they were too criminal and violent for Hammerskin tastes - which is saying lot since Hammerskins are not exactly living by the teachings of Gandhi.

Sharon is also a badge-wearing Court Assistant working within the Office of Court Administrations (OCA), which is the New York State department that handles security in the state courts. It's even deeper than that, though. She is the Court Assistant to Judge Jane Pearl, the Supervising Judge of Kings County Family Court. For those who are not from NYC, that means the Judge is in charge of the entire Family Court system in Brooklyn, and Sharon Hewitt is - in layman's terms - her Executive Secretary!

You can pause here to recover from either the shock or laugh attack you may be experiencing.

Now we had to make sure as hell all of our information was on point, even going to the Kings County Courthouse on Jay St. in Brooklyn where she works to confirm that bit of info, and sure enough it all panned out. Everything we have - including the link to her (now private) MySpace account is in this entry. What we will stress, however, is despite how close she may be to Judge Pearl, there is nothing we have seen that indicates that Judge Pearl shares the same beliefs, is active in white supremacist activities, or even knows about the extracurricular activities that Sharon Hewitt is involved in.

Here is what we have been able to find out. Sharon reportedly dated Jason Barnett (aka Jason Hoffman) of the American Thule Society (ATS). She was even at the National Socialist Movement (NSM) rallies in Valley Forge, PA in September 2004 and Yorktown, VA in June 2005. Like we said, she is one of the boldest boneheads we have seen, given her position. Our guess is she might have thought she can play it off, because she is not as Nazi as her fellow Nazis are.

In addition to ATS and VSC, Sharon frequents the third positionist crowd, meaning she may tolerate a bit more than most boneheads would - kind of a Nazi Lite, to coin a phrase. Folks that may sympathize with leftward leanings tend to get suckered into a fascist position by this crowd because they tend to use leftist positions and arguments to rope people in. That caused more than a few problems between Sharon, Jason and the ATS. One issue has been the fact that her daughter has not only dated black men, they are allowed in the house! 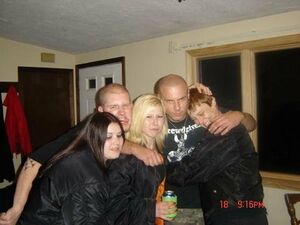 Here she is on the right with Chantel (black-haired female who goes by "Champagne" on MySpace) and Christine (blond) the two guys are Steve and Mike. Steve is a Vinlander.

Now the arguments surrounding this is something we sincerely wish we could have been a fly on the wall for, but as it is we would just have to settle for viewing the outcome, namely her breakup with Jason and her leaving ATS. From there, she joined the American Front (AF), a third positionist crew that goes back a few decades (one of its leaders back in the day, Robert Heick, was on the panel of that infamous episode of Geraldo where the talk show host had his nose broken). Somewhere along the line it was back to hanging out with the Vinlanders. Either that or she never stopped.

In any case, she has shown up in group photos with Vinlanders, and her MySpace link to her profile is "Sha1428". Obviously, "Sha" is short for "Sharon" and "14" is a reference to the"14 Words" ("We must secure an existence for White People and a future for our children."), but "28" is referring to Council 28, which is a network of bonehead crews in the country. The VSC is a part of that. She reportedly has dated Vinlander head Brien James, but we don't know exactly when.

Earlier this year, the Vinlanders had written a statement posted on their website saying they are out of the White Racialist Movement. This has not changed a damn thing. Aside from the fact that many view the statement as convoluted, they still associate with the same people and have the same beliefs. Even more important is the fact that the damage they have done and are still doing has not been forgotten or forgiven. That makes Sharon Hewitt's position working for one of the more influential judges in New York City a big issue, and we doubt very highly we will be the only ones raising it.