On August 24, 2002 (A24), the National Alliance sponsored a rally on the steps of the US Capitol in Washington, DC as well as a concert later that evening. A bus carrying a group of neo-Nazis that wanted to participate was parked at the Baltimore Travel Center when a group of people not too happy about them being in town engaged in a bit of a battle with them, the end result being a number of the boneheads being badly injured and the bus, as one of them put it, being demolished. One of the injured was the woman we feature here, Goodner, who we knew at the time as Tina Edwards. We knew about this one before A24. She was among a group of people who posted on Stormfront that dared us to publish their pics on this site, which we obliged them in doing. She however left a huge paper trail for us to follow, even posting on the signboard of the late Nationalist Movement leader Dick Barrett’s website, so we were able to compile a bit of information on her. 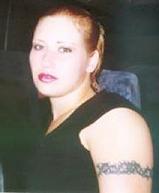 If Tina doesn’t look too happy, it is because this is a picture of her in Baltimore on the morning of Aug 24, 2002 when a huge rally bringing out over 400 Nazis to Washington, DC was going to be held. About 20 minutes before, she found out how a steel pipe felt across her head.

The name she went by on the web is “Labrat”, and the signature line on her posts at Stormfront used to say, “Sleeping with as many skins as you can does not make YOU a skin!!!!” When we read this, our first comments were, “What a life SHE must have led!!” It has been apparently. According to her bio on one of the websites she could at the time (which we have to warn you should take with a huge grain of salt), she was born Tamarina Linea DeFeo in 1977 in Staten Island, NY to Diane Quince and Thomas DeFeo. This is something we did not know when we first posted her entry. The surname “DeFeo” suggests she is Hispanic, and indeed we have been told that her lineage extends to Puerto Rico. We were never able to confirm that, but there was a lot of crap we had to sift through regarding her unfortunately.

In that bio it stated that after being adopted at 6 in Pittsburgh and eventually leaving that home at 13 for Atlantic City, she went back to New York at 16, where she found her mother, and stayed there until she was 18. She then says she went to Michigan to take care of her grandmother and made the state her home. Somewhere along the way, she did a stint in the US Air Force as well as in unholy matrimony with a guy named Ryan Edwards, who posted on Stormfront under the name “Redneck_1488”. She says that marriage was particularly abusive and she got out of it in 2001. That had put her in various spots throughout the country, first in California, where she hooked up with a since-disappeared-from-the-scene Nazi named RJ Schott, then to Tulsa, Ok, where her friend Charles John Juba’s then-significant other Courtney lived, then Hilton Head, SC, then Corpus Christi, TX. It was as if she moved with each boyfriend! Sleeping with as many skins as she can does not make her a skin, but it just might be giving her free room and board at least!

According to some of her posts, Edwards spent a year in jail for shooting a black person, “but complied with my court order and got a hell of a break thanks to a pro-white judge in Washington D.C.” Ummm…yeah, sure. We believe this is pure bullshit, especially since she does not even mention it in her own bio. Not only that but she is fond of shooting guns, and has posted pics on herself on line posing or handling firearms. If she spent time for shooting anyone, she would not be allowed to do so, and some law enforcement agency would have snatched her up by now..

She has also been in a number of groups in the past decade. She was part of Northern Michigan Skins, and eventually became a member of EURO, the group founded in 2000 by David Duke, and became a particularly active WP. While looking for information on her and others, we came across this piece on another website dated in 2000. We know it is her because the email address and screen name has not changed in the two years since we saw it. She has since confirmed it was her – and so are the misspellings, by the way:

In her bio, she says this cancer was part of a miscarriage she suffered at the time. When we first put her picture up on that Stormfront Pictures Page that we used to have up, we wrote the following and had it on this entry for a while:

Oops. This line pissed her off and it has been all out war with her ever since. We make no apologies though. Remember that she brags about shooting someone. Even if it is possibly a lie, if she felt nothing about that, why should we feel anything for her?

Edwards was someone we heard a lot from. We had no problem with that either, none at all. In fact, it has become pretty comical in spots. Dig her response to us on Stormfront Oct. 3, 2002 regarding posting the above picture and caption from her misadventure as she tried to participate in the Neo-Nazi rally in front of the US Capitol on A24:

Apparently someone noticed that was indeed what we said and by the time we got to see the post, only the last sentence remained. Too late. We have a lot of friends out there and they make sure to keep gems like this for us when they see them. It is starting to be a slogan of ours, so we will say it again: This is why we call them boneheads!!!

These days, we are not sure how active Edwards is as she hasn’t been out and about as much as she used to. In October, 2004, her ex-husband Ryan Edwards, apparently anxious to join his master Satan, committed suicide. “Labrat” grieved, then remarried that following Valentine’s Day. Tina was hooked up with Billy Roper and his National Alliance wanna-be group White Revolution, but she has since left the group and the group itself folded a few years later. Her last post on Stormfront – at least as “Labrat” was on March 30, 2009 and it notes that her account was disabled upon request. We have been told that a lot of circumstances are causing people to distance themselves from her and she may be persona non grata among her old circles. If there is truth to her being part Hispanic, that might have done it.

Fortunately if you know what to look for on the internet you can find anything. In 2015, she married Nick Goodner – a wedding registry listing her maiden name as “Hughes” – after they met online and had their first date in Ohio where he had a house. They currently live in Ganado, Texas. Again, her current political activities are unknown.