If you want to know the source of all the hate routines California saw in from the late 70s to late 80s, look no further than the Metzgers. This father-son team run W.A.R. - White Aryan Resistance - from their home in Fallbrook, CA, not too far away from San Diego. 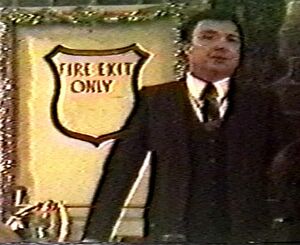 After spending the past decade off the radar screen however, they are now trying to make themselves relevant again.

Born on April 9, 1938 (he shares a birthday with Paul Robeson), Tom Metzger started out as a Republican Party worker in the sixties trying to get Barry Goldwater elected. He became more and more radical after that, joining groups such as the John Birch Society, the American Independent Party, and eventually the Ku Klux Klan, where he became the Grand Dragon. He formed W.A.R. after breaking from the KKK.

The positions of W.A.R. are as follows:

Among the things that W.A.R. has done was publish a newspaper of the same name, and a public access television program called Race and Reason that has seen it share of opposition from cities that objected to the broadcasts on their cable outlets. They were able to beat back that oppostition citing the first ammendment they work to dismantle for everyone else.

Now Tom and his wife had six kids, five of them daughters. The one son was John, and he came into the scene as the president of W.A.R. Youth when Greg Withrow, then head of the White Student Union renounced his racist ideologies. For this, Withrow was attacked by youth loyal to John and nailed to a plank of wood (Withrow is now saying that all of this was just a ruse to infiltrate the left, but no one, not even his old comrades buy it). John has been around the world promoting white supremacy and was even barred from entering Germany for this. He and his father were incarcerated in Canada, incidentially when they went to that country to promote their ideals.

Like his father, John has appeared on a number of different programs, sometimes with dad, sometimes flying solo. He has appeared on an Oprah Winfrey's program which was so volatile, Oprah decided never to have white supremacists on her show again. He has also seen heated appearances on Wally George's program and on Donahue. John Metzger incidentially was the person Roy Innis was choking on that infamous Geraldo episode where the trash talk-show host had his nose broken.

Roy Innis choking John Metzger on that infamous Geraldo episode where the trash talk-show host had his nose broken.

The Metzgers were being dealt with however. In Portland OR, a young Ethiopian named Mulugeta Seraw was murdered by skinheads loyal to W.A.R. and the Metzgers were found liable to the tune of $12.5 million. Tom Metzger lost his home, TV repair shop and trailer that he used as a meeting hall. When he lost he said it didn't matter because he planted his seeds and that they are "imbedded now." That was probably a good thing for him because all this made him a relic afterwards. John Metzger hasn't been seen in a number of years, but Tom has been coming out to various WP events as of late. He even fired off an email to us in 2003. Did we see the last of the Metzgers? No, but that's just because we have pictures.