Born and raised in Kingsland, GA, Travis David Condor came from a military family and enlisted in the military after attending St. Mary’s High School. While serving in Iraq with the 82nd Airborne Division, he sported a “BABY KILLER” patch on his fatigues. In April 2010 he was off of his Fort Bragg NC military base but on active duty when CBS Cleveland and WCPO Cincinnati articles announced that he plead guilty to the beating of a homeless man in Cincinnati Ohio. 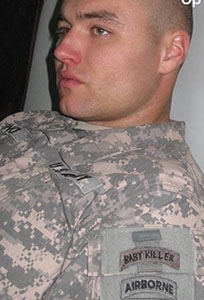 Travis David Condor while serving with the 82nd Airborne Division.

Condor, along with three other men, had been drinking and decided to get their rocks off by “finding a bum” to attack. They found a homeless encampment under a bridge and beat a sleeping man with a baseball bat and pieces of pipe, yelling at him for “trespassing” and cursing at him saying he was “a bum”. The survivor, who had been living at the encampment for two years, suffered facial fractures and needed 18 stitches to close his head wounds.

Condor, who was on active duty with the 82nd Airborne Division and ex-soldier Matthew MacMurtrie were given just 90 days after their face-to-face apology to their victim, with credit for time served. Condor’s criminal case cannot be located at this time but the personal injury claim is at Hamilton County OH Civil Case No. A 1102151. Self-proclaimed [racist] “skinhead” Michael Hesson of Hamilton, north of Cincinnati, received four years total for the beating and for later taking part in the fatal accidental shooting of his pregnant girlfriend, Janice Svajda, on January 6, 2011 (Hamilton County OH case no. B 1100183-B). Pvt. Riley Feller, who was on active duty with the 16th Cavalry Regiment stationed at Fort Knox in Kentucky, received a felonious assault charge for the beating and was sentenced to five years. And for the fatal shooting of Svajda and her unborn child, he received two counts of reckless homicide and having a weapon while under a disability (a.k.a. drunk), resulting in an aggregate sentence of 17 years’ imprisonment for the two separate incidents (Hamilton County OH case no. B 1105258 and 985 N.E.2d 210 (2012)).

A marriage license was issued to Samantha Carr Condor (Page) and Travis Condor on September 7, 2011 in Cincinnati, Ohio. Samantha was last known to work as a bartender at The Break Room 1178 Manchester Street, Lexington KY 40508, phone (859) 425-6504. As of this writing, the bar’s phone number is not in service.

He runs the white power music label American Defense Records, which was established in Lexington, KY but is reported to be in Pittsburgh, PA as of 2017. The label’s discography, in the same tradition as Rock Against Communism, focuses on releasing bands and building a social network of fascists that centers on “anti-communism” and white power sects of rock/punk/oi bands. Through American Defense Records, Condor participates in Hammerfest (Georgia).

Condor moved to Pittsburgh, PA in 2017, and his parents moved from Georgia. They now live about 40 minutes apart and he can do shooting range trips with his father who drives a Chevy truck sporting a confederate flag.

Condor is a known Keystone United affiliate. He is pictured in this white supremacist group’s May 2018 picnic photo which was held outside Pittsburgh PA. Condor continues to surround himself with known white supremacists. 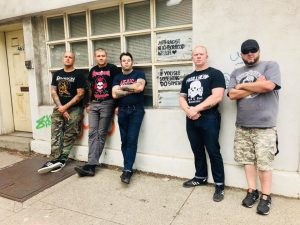