On December 5, 2002, Senator Trent Lott of Mississippi was honoring outgoing Senator Strom Thurmond during his 100 birthday and retirement party. While making his remarks, he made this statement:

At that time Strom Thurmond ran as a segregationalist on the breakaway Dixiecrat ticket, and until 1964 (just in time for the Civil Rights Bill to be passed - making any stance on segregation a suicidal move) when he "renounced" those views, was its most vocal proponents. Lott sparked a firestorm of controversy with that line which at the time of this writing was threatening his future position as Senate Majority Leader.

This was not just a gaffe said in jest. Not only did he say almost the same exact thing at a 1980 rally for Ronald Reagan in Jackson, MS, but as the press looked into his record they found a history of support for white supremacist causes going back as far as when he was a student at the University of Mississippi and he worked to keep his fraternity segregated. In light of that piece of info, we find it funny how Robert Novak while defending Lott on Crossfire during all the controversy, tried to paint an anti-racist portrait of him by saying he also fought against the racist violence that ensued at the Oxford campus (see the James Meredith entry for the story on that episode). Sorry, Bob. A stance against violence did not make him any less a racist.

If he had no first hand knowledge of the group's views he had to be the stupidest person on the planet.

Fact is, for all the scrutiny Lott is getting today, we should have seen just as much if not more in 1998. Instead he was allowed to continue on as if this was not a problem for anyone. When one goes after Lott, we should also hold to scrutiny those that clammed up the first time he was called out. They would more than likely be the next ones we have to deal with.

Senator Trent Lott posed with officials of the pro-white Council of Conservative Citizens in 1997. The following year he said he has "no first-hand knowledge" of the views of the group that made him an honorary member. 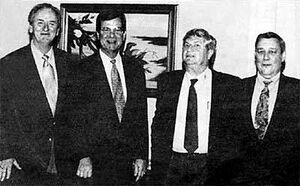 From left, William D. Lord, senior coordinator ( who has twice served as chairman of the Lott Senate campaign in Carroll County, Mississippi) ; Mr. Lott; Tom Dover, president, and Gordon L. Baum, executive officer. In July 2003, Mr. Lord found his way into another picture with former RNC Chairman Haley Barbour who posed with him and others during a C of CC-sponsored function while he was running for governor.

He downplays it a lot, but Lott is also a leading figure in the neo-Confederate movement which the C of CC is active in promoting by defending Confederate flags across the south and promoting Confederate activities. He is the spokesperson in the Sons of Confederate Veterans recruiting video and a member. One of his major activities was the support and promotion of Jefferson Davis, the first and only President of the Confederate States of America and onetime U.S. Senator of Mississippi. Beauvior, Jefferson Davis's last residence was located in then U.S. Rep. Lott's 5th district.

Trent Lott was awarded the Jefferson Davis medal by the United Daughters of the Confederacy for his successful efforts to get Jefferson Davis' citizenship restored, a step backward legitimizing the Confederacy in this country. In the Feb. 1980, issue of the United Daughters of the Confederacy, his address to the UDC at the Confederate Monument at Arlington National Cemetery, June 3, 1979, is reprinted in full detailing his view of Jefferson Davis as a great American, the unjustness of his not having citizenship, and the process of restoring his citizenship. Even though this restoration of citizenship required a 2/3rds vote of both houses under the 14th Amendment. It was not that difficult, the measure passed by overwhelming majorities in both houses. In the house less than 15 members opposed it. President Jimmy Carter, who is also a pro-Confederate, signed it into law October 17, 1978. There was some public outcry but both the Democrats and Republicans seeking southern electoral votes supported the measure nearly unanimously.

In a magazine called the Southern Partisan (yep, the same racist, pro-slavery rag John Ashcroft gave an interview to), he was asked about a statement he made during the 80s at the Convention of the Sons of Confederate Veterans in Biloxi, Mississippi, in which he said that "the spirit of Jefferson Davis lives in the 1984 Republican Platform." To the question, Trent Lott responded:

To defend an enemy of this country like Davis questions how effective Lott is as a representative of this country. The rest of the article, incidentally, detailed how Southerners like himself are becoming more influential in the Republican party as well as his opposition to civil rights legislation for it being unfair to the south and the Martin Luther King holiday.

One thing he did, by the way, is to get the desk of Jefferson Davis when he was a senator, assigned to the senior senator of Mississippi. This resolution too passed the Senate with great support and little discussion.

The Grenada County native began his political career in 1968, as an assistant to the Democratic U.S. Rep. William Colmer, a conservative Democrat who supported segregation, one year after receiving a law degree from the University of Mississippi. After Colmer retired in 1972, Lott left the party and was elected to Congress and in 1988, went on to the Senate where he has been ever since.

After people started getting wind of the Council of Conservative Citizens, and Lott's ties to the group, he issued a statement.

Too little too late, especially after his most recent controversy, which is still playing itself out. Lott illustrates exactly what it is that people of color have been looking at, and what it is we need to fight.

Trent Lott is representative of the dominate political forces of Mississippi, which is now building a Presidential Library at the cost of millions for Jefferson Davis. That's right. Your tax dollars are going to pay tribute to America's bloodiest enemy.