Tomasz Winnicki, born on November 17, 1975, once proudly described himself as London, Ontario's "biggest hater; His posts on the VNN forums were profanity-laced diatribes against immigrants, African-Canadians, First Nations peoples, women, the police, homosexuals, and his biggest target, Jews. He threatens. He bullies. He's as close to the stereotypical, frothing at the mouth bigot that one can find in real life outside of comic books.

But really, how seriously can you take someone who at 32 years old and based on current knowledge still lives in his mother's and father's basement and doesn't seem to have ever lived on his own? Well, there was the brief exception of his stay for a few months in one of Canada's fine correctional facilities for violation of a court injunction, but we're getting ahead of ourselves.

Winnicki is himself an immigrant who's family emigrated to Canada from Poland in 1987. He started making waves as a bigot in 2003 when someone discovered his racist website. Though the service provider did pull the plug on Winnicki when they were made aware of the content of his website, this wasn't the end of Winnicki's online activities. He soon found a new home on Alex Linder's Vanguard News Network where he first posted as Thexder_3D. When his real identity was discovered he started posting under his own name. His posts are characteristically rambling, hate-filled and barely literate (you'd think his vocabulary was limited to the phrase, "fuck you Jews"; when reading his posts) screeds targeting anyone not White, male, heterosexual, or, well, almost averyone really (pictured left to right: Jason King, David Ruud, Tomasz Winnicki, Tyler Chilcott, Tomas Szymanski). 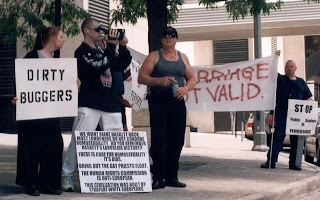 Soon Winnicki began attending protests along side Canadian Heritage Alliance leader Melissa Guille, Jason Ouwendyk and his Northern Alliance boneheads and Paul Fromm, the acknowledged leader of the Canadian far right. He mostly attended protests of London's Gay Pride parades where he held up charming signs such as "AIDS Cures Homosexuals"; but there was one protest he had attempted to join in but was prevented from doing so. In September 2004, Winnicki was driving his car with three other men were on their way to a rally in Toronto in support of Holocaust denier Ernst Zundel. When stopped by the police Winnicki's car was searched. In his car the police discovered throwing knives, body armour, and a bow with arrows. Instead of attending the rally, Winnicki and the three other men were arrested. He plead guilty to weapons charges on November 23, 2006 and was given a conditional discharge with 6 months probation. It was discovered that one of the men who was arrested with Winnicki was Randal Linton who posts on Stormfront and other hate sites as "Raghnall." The other two were Kevin Lovett and Jason King (Pictured: Melissa Guille holding "Dirty Buggers" sign next to Tomasz Winnicki with camera).

 The overt and extreme nature of Winnicki's hate speech brought him to the attention of a number of human rights organizations who called on the city of London and the government of Ontario to do something about him since Winnicki was flagrantly violating Section 13 of the Canadian Human Rights Act and Section 319 of the Canadian Criminal Code. Human rights lawyer Richard Warman brought a Section 13 complaint against Winnicki. In a landmark ruling in October 2005, the Federal Court of Canada issued an injuction ordering Winnicki to stop posting hate propaganda on the Internet. When Winnicki repeatedly violated the injunction, the Federal Court sentenced Winnicki to nine months in prison in July. However he served only around 2 months before he was released on an appeal to be heard in January 2007. Winnicki actually faces another contempt charge for continuing to violate the Canadian Human Rights Tribunal's permanent cease and desist order of April, 2006. Besides the permanent cease and desist order, Winnicki was fined $6000.00 as well as an additional $5500.00 to be paid to Richard Warman for damages.

To paraphrase Tomasz Winnicki, if reports from the guards are to be believed, he fought the law and the law kicked his ass.

This isn't the end of this sad tale of a pathetic social maladjusted individual. When Alex Linder and the posters on VNN found out about Winnicki's imprisonment, they weren't at all pleased. Linder posted:

As a result of this threat, VNN's service provider shut down the website (though it appeared online again within a few days) and Linder himself has come under investigation for having made threats against Warman and the Federal Court judge.

When Winnicki got out of jail, he continued his online activities on VNN, though he now self-censors himself. This is where we're going to have some fun looking at what he has written since he was released, at least some of the more recent missives.

1. One of Winnicki's go-to arguments is related to the murder rate in Toronto. He claims Toronto to be the "murder capital of Canada"; based on the raw numbers. This year in the GTA region, there were some 84 murders. Winnicki claims this is clear evidence that multi-ethnic Toronto is a seething den of ethnic violence and advocates:

The problem with Winnicki's argument is that the raw numbers don't provide the true reflection of murders in Toronto. If one were to look at the murder rate per 100,000 people, the GTA region's murder rate is something like 3 per 100,000 people. Compare this to Edmonton, Calgary, Regina, or Winnipeg (cities with nowhere near the ethnic diversity of Toronto) and Toronto's murder rate is quite low compared to other major urban centres in Canada.

But the truth is no defence in the minds of people like Tomasz Winnicki.

2. Keep in mind what he says about Toronto when you read this next post:

Winnicki searches for examples of non-European Canadians who commit violent crimes, ignoring those committed by Whites of course, in his efforts to claim that non-Whites are predisposed to violence. Yet, he lauds the violent, thuggish examples of behaviour displayed in the video he posted?

He praises Russian neo-Nazis and ultra-nationalists and says Russia gives him hope. The most recent numbers regarding the Russian murder rate in 2000 is almost 20 people per 100,000 were murdered. At the same time, Canada's rate was about 1.6 murders per 100,000. Russia is predominately European west of the Urals where most of the population resides. This gives Winnicki hope? Perhaps these stories give Winnicki hope?

3. Winnicki uses the racial-mythological "Aryan"; when describing himself. A few examples:

Besides the fact that these posts show that Winnicki is a bit delusional, we're interested to know why he believes himself to be an Aryan? Keep in mind that Winnicki is a Polish immigrant to Canada. What nation do most people associate with the concept of an "Aryan Race"; and what was that nation's relationship with Poland? Seems to us that it Winnicki want's to know what Hitler's view of Poles, a Slavic ethnic group, was, he might do a bit of research on the subject:

You, Mr. Winnicki, are not an Aryan in the eyes of the Third Reich. You, and your fellow Poles, Russians, Serbians, Croats, Latvians, Lithuanians, Belorussians, Ukrainians, and other Slavs, are Untermensch.

Winnicki is a blowhard compensating for his own sad life. But he sure does put on a show, doesn't he?